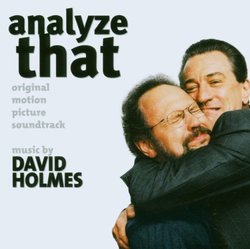 It's not often that a sequel is more enjoyable than the original film, and with comedies it's even rarer.  However in the case of Analyze That, the follow-up to Harold Ramis' hit comedy Analyze This, the film was much faster paced and more entertaining than the first.  Composer Howard Shore didn't return for the sequel, and stepping up to replace him was David Holmes.  The resulting score is a highly energetic, funky electronic jazzy score that is musically pretty much the same as what you would expect from anything David Holmes would write.  Call it Oceans Twelve if you want - but it works.

From the heavy breathing orgasmic vocals in "Opening Credits" (replete with stopwatch beeping sound that drove me crazy), to the slow blues jazz organ in "Bedroom", the album is a rather fast paced listen.  Much of it blends together, at times giving the illusion of a 30-minute long jam session, but for what it is, I can't say it's all that unpleasant.  It's not an album to rush out and buy, but it certainly makes for some enjoyable sonic wallpaper, if you're in the mood.