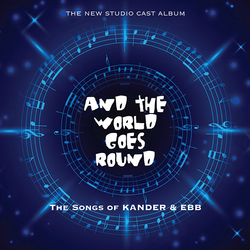 And the World Goes Round - Studio Cast

Back in 1991, a bunch of talented artists came together to create a musical revue based on the songs of John Kander & Fred Ebb. They were director Scott Ellis, choreographer Susan Stroman and writer David Thompson. With musical director, David Loud, they created what the New York Times called "An unexpected delight: A handsome, tasteful, snazzily staged outpouring of song and dance that celebrates all the virtues of the Kander-Ebb catalogue, while scrupulously avoiding most of the cloying clichés of and-then-I-wrote anthologies."

Audiences flocked to the show, which opened on March 18, 1991 at the newly renovated Westside Arts Theatre, where it played for 408 performances. After closing, the show had a ten-month national tour. It won the Lucille Lortel Award for Outstanding Musical and the Drama Desk Award for Outstanding Musical Revue. The show has been steadily produced all over the world ever since. The original 1991 RCA cast album was a truncated version of the show on one CD. It was missing quite a bit of material and it also had expanded orchestrations done especially for that recording. For this brand new recording, we used the show's original orchestrations and this new 2-CD set is a complete version of the entire show from start to finish. As a bonus, we've also included the various playoffs for certain songs.