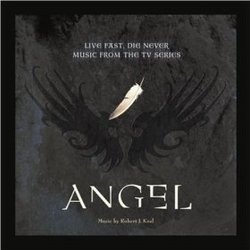 Writing music for television has got to be a tough gig. Every week, you need to pump out 15 to 20 minutes of solid music, resorting to orchestral samples and synthesizers (a small-sized orchestra if you're very lucky) and making it sound good. But not too good, because epic music and obvious themes are generally frowned upon in this medium. You need to lay low.

It's this kind of finely-tuned equilibrium that Robert J. Kral managed to achieve over five seasons of scoring the television show Angel, an edgier and darker spin-off of Joss Whedon's Buffy the Vampire Slayer, which broke free of its sister series and rounded up a solid cast with excellent writing and complex, interwoven story arcs. Christophe Beck, the composer most famously associated with Buffy, scored half of Angel's first season, leaving the reigns of the series to Kral for season two. Angel: Live Fast, Die Never was certainly a few years in the making, a release of musical highlights from the show as chosen by the composer, the production team, and the fans who made their voice heard on message boards. The album production is first rate. Not only that, but the music itself is a godsend for fans of quality television scoring: Kral's compositions here are thematic, epic, and powerful, with dense, dissonant orchestrations, rousing brass lines, and intense percussive work.

The sound for the show takes a page or two from the book of Beck (Christophe, that is, not that other Beck), with a similar mix of orchestral samples pushed to their limits and mixed in with twisted synth patches and distorted recordings. Unlike the scores of Buffy, however, the music here is more aggressive, with insistant percussion and loud orchestral hits. Fans of consonance beware: this might not be to your liking. Rob Kral has given aural life to the dark fantasy genre, expertly combining jousting themes with wailing, avant-gardiste brass.

The album opens with an extended cut of the "Main Title Theme" as performed by Darling Violetta. As much as the prospect of getting a longer version of the "cello-rock"-inclined Main Title may make one's palms sweat with anticipation, I must admit that this "Sanctuary Extended Remix" sounds kind of choppy, as if it has been assembled on a laptop late at night after a two-hour jamming session. The inclusion of the original, 50-second theme would have been welcome at the halfway mark, but we'll just have to do with the extended cut, which offers less string work and more twangy electric guitar and modified vocals. We are then plunged into Armageddon as "Start the Apocalypse" lands us straight into Angel Investigations' rooftop fight with the Beast in season four, an action cue which defines the Angel sound: pounding, metallic percussion; dissonant, high-pitched synthesized woodwinds; suspenseful string and brass lines, with a dark, choral crescendo thrown in for apocalyptic purposes. It's a great way to start the album and it's the perfect showcase of Rob Kral's talents. "Massive Assault", from season two's "The Thin Dead Line", is a percussive fest, with Japanese reverberated woodblocks, metallic, pulse-pounding hits, and an array of subtle rhythmic tricks which keep the soundscape alive, much like the army of the undead making its way to our protagonists. "Home" and "Hero" take us away from the unrelenting dissonance and show us the gentler side of Kral's compositions: tiding strings accompany a tender piano theme as Angel watches over his son at the end of "Home" and a boy soprano softly sings Doyle's Theme before his untimely demise.

The second quarter of the album centers on Angel's relationship with Darla, the vampire who sired him and who came back as a human at the end of season 1, only to be turned again, become pregnant with Angel's son, and sacrifice herself to save the unborn child from her potentially lethal postpartum aggression. "The Trials of Darla" exposes Angel's Theme in fine form at the 4:30 mark on nearly-screaming trumpets over running strings. "Dreaming of Darla" is a particularly creepy piece, with a minor-key, crystalline, seductive motif overriding Darla's Theme and bringing with it a disturbing sense of dark playfulness. The Darla musical arc culminates into "Darla's Sacrifice", a great dramatic piece with a strong, recurring brass melody and tick-tocking violin figures. As Darla is turned to dust, revealing the offspring, a warm synth complements lush chords from the string ensemble, while the piano echoes Darla's motif for the last time.

The final chunk of score takes us to Pylea, a demon dimension visited at the end of season 2, giving Kral the opportunity to use chivalresque horn calls, medieval flute work, and driving percussion. "Through the Looking Glass" introduces us to Fred's Theme, a delicate melody for woodwinds backed by an acoustic guitar and shimmering glockenspiel. It's quite interesting to hear Kral adapt the sound he crafted for the series into something just off the beaten path, showing a versatility to the signature music of Angel that few shows can demonstrate.

The album concludes with five songs that have the notable merit of not feeling tacked on. "Touched" by Vast is a great alternative song which played at the very beginning of the series, fusing a rock sensibility with a Middle Eastern edge to reveal a broad sonic scope and a catchy choral sample. Chris Kane, as Lindsey, strums his guitar and pitches the prophetic "LA Song" with a full and surprising voice; definitely a highlight for fans of the series who'll remember the performance. Andy Hallet then takes it away, in character as the Host, with both "Lady Marmalade" and "It's Not Easy Being Green" (appropriately enough). His voice is intensely nasal and you can't help but be swept up by the fun he's having with a character that could very easily have become ludicrous (I mean, a demon karaoke bar?). We end things with "A Place Called Home", a minimalist, folksy requiem for the character of Fred as sung by Kim Richey. A simple melody and delicate guitar accompaniment, with minimal drums in the background, keep things honest and down-to-earth while tears are gushing left and right from the fans who remember, oh yes, fans who remember that scene....

Angel: Live Fast, Die Never is that rare feat of ingenious aural equilibrium: a television score which succeeds with dense orchestrations, rallying themes, and a broad emotional scope without trying too hard to overachieve. It sounds like a seasoned veteran behind the keyboard, with years of experience, yet still demonstrating that youthful exuberance and willingness to experiment. The scores are wonderfully complemented by a small, unique, and distinctive group of songs, carefully chosen and beautifully incorporated into the dark landscapes of Angel's L.A. This is one for the fans and for everyone who wasn't a fan and who'll now wish he'd been.