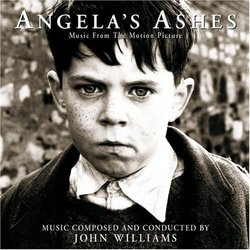 John Williams had better clear off some space on the mantle. This year he not only gave us a new Star Wars score, but he also provided us with an exceptionally warm, dramatic, and moving score for Angela's Ashes. The Academy will certainly have a problem on their hands, considering that this year the two score categories have been re-merged into one score. That means of all the scores, only five can be tapped with a nomination.

Angela's Ashes is based on the Pulitzer Prize-winning memoir by Frank McCourt, and follows the experiences of an Irish family immigrating to America. The score that Williams provides is held together by numerous themes that are lyrical enough that I had (for a short time) feared that there might even be a pop song at the end of the album. Thankfully, there wasn't - although there was the inclusion of selected narration from the film. Initially this bothered me, but upon further listening I grew to enjoy the dialogue, which didn't intrude too much on the score, except for overlapping the beginning of some cues.

The orchestration and feeling of the score is similar to a mixing of Sabrina (light piano with heavy strings) and "Anakin's Theme" from Star Wars: Episode 1 - The Phantom Menace. The main theme starts out with a quiet piano that slowly builds with strings and woodwinds. There is a noticeable lack of brass in the score, which lends it a much more subdued and classical feeling. In fact, there are moments in this score that stand out from other contemporary scores of the 1990s - there are plenty of instrument solos. Many composers tend to stay away from that type of composing, and feel that if the orchestra is sitting there not playing, it's a waste of time (and money) for them. But not with Williams.

This is the type of score you would listen to for evoking the emotions you felt while watching the film. Unfortunately, as of this writing the film is still a few weeks off, and I haven't seen it - but knowing the basics of the story can certainly help imagine how it might work in the film. There are some problems with that approach, as this music might be better off on it's own than in the film, but I will assume that even if this highly anticipated film fails all expectations, at the very least it will have yielded a very powerful and emotional score from one of the top composers working today. For that, you shouldn't even hesitate to pick this one up.