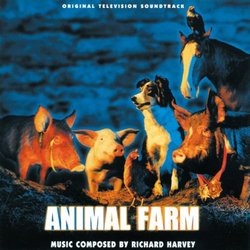 In most Hallmark Entertainment productions, such as Gulliver's Travels, Merlin, and others, music has always played an important role. Composer Trevor Jones, who lent his talents to the aforementioned mini-series - as well as a few others over the past few years - tended to filled this role. So it came as a big surprise after watching Animal Farm earlier last year to discover that Richard Harvey - not Trevor Jones - had written the score. Surprising because it had the same tone and high level of quality that I had come to expect from Trevor Jones.

The main theme from the film has a wonderful epic quality about it. The "Beasts of the World" anthem sung by the cast is a rousing and uplifting theme that appropriately fits into the whole satire that George Orwell was creating. The use of the Budapest Radio Choir also dramatically increases the production value of the score. Parts of the score reminds me a bit of The Last of the Mohicans something that might have been produced at Media Ventures ("The Battle of the Barn", for example). Probably the most emotional cue on the album was "Boxer's Fate", when the steadfast horse is taken off to the glue factory. "The Song of the Grateful Duck" is a rousing song that evokes images of the Russian revolution (appropriately enough)!

The film had its ups and downs, and while it stuck fairly close to the novel, it seemed to have a rather anti-climactic ending. But accuracy is better than making up some big Hollywood ending, and it was a rather enjoyable miniseries. The album, released on Varese Sarabande records, runs a hearty 66-minutes, and is well worth checking out. Richard Harvey hasn't really done any real high-profile projects - his work has tended to be for television, and after doing Animal Farm he did The Magical Legend of the Leprechauns. But when listening to Animal Farm, there is enough depth and thought placed into the score that I wouldn't be surprised if sometime in the near future Harvey gets his day in the sun.