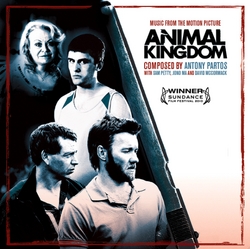 Animal Kingdom is an Australian film directed by David Michod. The film deals with the Melbourne underworld where tensions are building between a family of dangerous criminals and equally dangerous police. It's the Wild West played out on the city's streets. The film was the winner of the World Cinema Jury Prize at the Sundance Film Festival 2010. The soundtrack includes an ethereal, electronic score by up and coming composer Antony Partos.