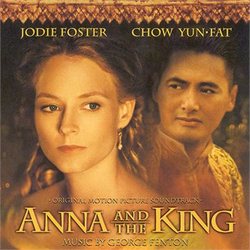 Anna and the King

Review: Anna and the King

While it seems to be doing only okay at the box office, and has even been banned in Thailand, Anna and the King was a rather solid movie. It had two very good actors (Chow Yun-Fat and Jodie Foster), wonderful locations, a tried-and-tested storyline, and a rather lavish score by George Fenton. Fenton had previously worked with director Andy Tennant on Ever After, and provided an amazing score for that film. For Anna and the King, Fenton utilized ethnic Asian instruments mixed with a traditional Western orchestra to provide a rather moving and emotional score to the film.

The main title, "Arriving At The Palace" is a good summary of the score - it has a large feeling of amazement and wonder as Anna arrives in Siam, and goes through about three or four different themes and motifs as the six-minute long cue runs it's course. There are moments of drama ("The House", "Flowers on The Water") and action ("Rajah Attack", "The Bridge"). But what works best in this score are the "romantic" cues. I use quotes because these are more tragic cues filled with sadness than romantic cues. Tuptim and her fiancé have a tragic romance, and the "forbidden" romance between Anna and the King never actually comes to fruition - it's only suggested at. The use of this sad theme (heard in a couple of cues, but most prominently in "Moonlit Beach"), adds a huge layer of subtext not only to the film, but to the score as well.

There are two "dance" cues on the album - one is the "Anniversary Polka" which plays during the anniversary dinner in the film, and the other is "I Am King, I Shall Lead" - a rather light and enjoyable waltz. Additionally, the first track on the album is the song "How Can I Not Love You" performed by Joy Enriquez. Written by Fenton, this song utilizes the sad "romantic" cue from the film and is a great song to listen to. Enriquez has a great voice, and I look forward to hearing more from this very talented vocalist.

Fenton recently received two Golden Globe nominations for Best Score and Best Song for this film, and I also recently included it in my Best 10 Soundtracks of 1999 list on SoundtrackNet. It's nice to know that this score is getting the attention it deserves, even if the film itself has a lackluster reception. Released on LaFace Records, this album should be widely available in most stores.