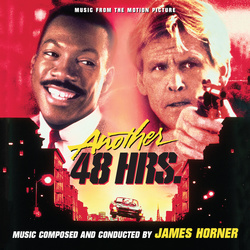 Intrada kicks off 2022 with an expanded release of James Horner's score to the 1990 Paramount film Another 48 Hrs. Thematically and stylistically it relies on the score to the original, with added twists and turns to fit the new story. A new color is added into the mix – the shakuhachi, to characterize the bikers who see themselves as a romanticized, modern-day version of feudal Japanese rōnin. Unlike the previous film, the sequel required substantially more music. Even so, there was a considerable amount of music dropped or dialed out of the finished film.

The score was originally featured on a release from Scotti Bros, featuring 20 minutes of score plus vocals. For this release, Intrada used Shawn Murphy's film mixes to create the expanded program in film order as James Horner originally intended, bringing the program to 47 minutes. The program also includes seven minutes of several alternates and as is customary at Intrada, placed in "The Extras" after the main program.