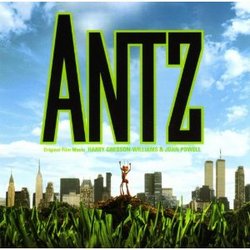 In Dreamworks' first animated feature film, Antz, Woody Allen voices "Z", an ant who wishes to be an individual. He falls for the beautiful Princess Bala (Sharon Stone), and uncovers a plot by the evil General Mandible (Gene Hackman) to take over the ant colony.

required a score that was filled with action, romance, drama, and yes, dancing. John Powell, who composed the hit film Face/Off, was hired to score this film. Shortly thereafter, Harry Gregson-Williams (Armageddon) joined the project, and the two collaborated resulting in a score that it one of the most fun scores of 1998.

Most scores seem to work well and be memorable when they are thematic. In Antz we have a nice piano theme for Z, and romantic theme for Princess Bala, a dark military theme for Mandible, and a whimsical theme for the Colony itself. Variations on these themes permeate the CD, and it's very easy to envision the scenes just by listening to the music. I really enjoyed the main theme for the Colony - the use of whistling was a quirky yet appropriate move.

Some cues on the CD are source cues: background music in the bar scenes, for instance. These cues have a very "lounge" feel to them - almost as if Henry Mancini had a hand in writing them. The standout cue would have to be the most boring rendition of Guantanamera I've ever heard - which at a point breaks into a full-fledged screaming brass version - then goes right back to its banal version. (Of course, this fits the scene in which it is played perfectly.)

A lot of the dark military cues for Mandible have a seemingly apparent nod to Crimson Tide - and the joke is not lost. There is also a variation on "When Johnny Comes Marching Home" which works well for the soldiers marching into battle. This is the second film (Small Soldiers being the first) from Dreamworks to use the tune, and I wonder if it will soon become part of their official repertoire.

The action cues come straight from the MediaVentures catalog. That is to say, they are perfect action cues. I have always enjoyed the action music coming from MediaVentures, even if (at times) it becomes hard to differentiate who wrote what. The key thing about the action music is that it not only uses the themes from the film, but it contains variations on the themes which enhance the tension and excitement. I do not recommend driving to these cues, since you might find yourself going over the speed limit.

All in all, the Antz soundtrack runs a very solid 53 minutes long, and should be in everyone's collection - especially if they saw the film.