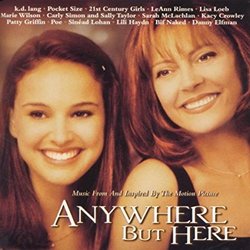 I haven't seen Anywhere But Here yet (the film opens November 12), but listening to the single suite of score from the film, composed by Danny Elfman (there are no credits like orchestrations, conducting, etc. included with advance copies of the album) is good enough. The music is like a sister of Good Will Hunting in that it is a very "female" take on the acoustic and contemporary stylings of Elfman's latest offerings. I'm not sure how I can describe it without getting in some sort of trouble, but it would seem that Danny Elfman has gotten in touch with his female side. It's logical seeing as Anywhere is the journey and relationship between mother (Susan Sarandon) and daughter (Queen Amidala - ahem - Natalie Portman), their troubles, etc - the epitome of the "chick flick". The draw for Danny Elfman must have been the chance to work with yet another director he must admire, Wayne Wang (The Joy Luck Club).

The score suite starts with the soft plucks of acoustic guitar and the familiar samples from Danny Elfman's digital repertoire. A soothing female voice joins the guitar (some have likened the un-named voice to the lead singer of The Cranberries, but I don't really agree). The effect is somewhat similar to that Patrick Doyle achieved with Great Expectations. Elfman achieves the same high level of success himself. While the first two cues are very contemporary (they even feature electric guitar wails!), it is followed by a more traditional and beautifully melodic cue (3:57) afterwards with a sprightly pizzicato, vibrant guitar plucks, piano and soft choir. The suite segues into some softer moments of reflection then (at 6:27) reprises the first cue with female voice - this time kicked up a notch. The recording quality is excellent too - clean, and mixed loudly on the same volume level with the songs. Speaking of the songs, they basically touch on the same themes: friendship, love, understanding - you know, girl things! (Just kidding).

There are a few decent song tracks, "Anywhere But Here" by K.D. Lang - get it, it's the title song! "Leaving's Not Leaving" by LeAnn Rimes is easily stomached compared to her past good-ol' country ballads. "Scream and Shout" by the 21st Century Girls, "I Wish" by Lisa Loeb and "Amity" by Carly Simon and Sally Taylor are the weakest of the bunch. "Ice Cream" is repackaged Sarah McLachlan while "Strange Wind" by Poe is a stand out track - and it also happens to be co-written by Danny Elfman and contains some of the same etheral and folksy qualities of his score which the lead singer of Poe performs the vocals for. Score die-hards may not like the songs, but they're somewhat bearable even to a hardened listener like myself. Perhaps a sprinkling more of Danny Elfman's music might have made things a bit more interesting, but as it is the songs and score complement each other and sound remarkably coherent.

I have to honestly say that after the first listen the score suite hooked me. While it may be very different than anything Danny Elfman has ever done in the past, it is a great testament to his unmatched versatility in scoring films. I certainly hope that there is more than the seven and a half minutes of score in the film - enough to comprise it's own album. At the very least, curious purchasers may take a listen to and like Elfman's contribution, in turn seeking out his past works. If Anywhere But Here receives good critical notices and Academy attention, Danny Elfman may be in line for another Oscar nomination.