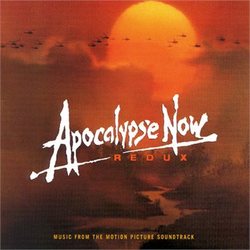 Truly one of the defining films about the Vietnam War is Francis Ford Coppola's masterpiece Apocalypse Now.  Loosely based on Joseph Conrad's novel "Heart of Darkness", the film follows Captain Willard (Martin Sheen) who is sent on a mission to find a renegade military outpost led by Colonel Kurtz (Marlon Brando), and assassinate him.  As he travels down the river looking for Kurtz, Willard slowly becomes consumed by the same madness that afflicted Kurtz - and he must find Kurtz before he succumbs to his insanity.  Recently re-issued in theaters with an extra 53-minutes of footage, Apocalypse Now Redux explores in further detail the personal relationships between Willard and his men, as well as the people they meet along their journey.  The soundtrack, containing score by Carmine Coppola as well as Francis, is probably not as memorable as the visuals and the storyline, but play a rather important, if subtle, role in the journey into madness.

When you ask someone about the music in Apocalypse Now, chances are that they will remember Wagner's "Ride of the Valkyries" more than anything else.  As well they should - it's part of a scene that is forever preserved in cinematic history.  The sweeping strings and harsh brass blaring out of the helicopter's speakers as a Vietnamese village is something you don't easily forget.  Also memorable is "The End" by The Doors, used in the opening sequence of the film.  It's dark, surreal, and the middle part is just completely insane.  (On a technical note, the sound quality is exquisite.)  But the underscore really goes to the heart of the film.  Carmine Coppala's music ranges from simple and tender, to dark and ominous.  Primarily synthesized, with guitar, flute and percussion accompaniment, the music can be harsh at times ("Nung River"), and ethereal at others ("Letters From Home").

A more traditional romantic cue can be heard in "Love Theme", but the synthesizers removes any warmth that might exist due to the melody.  "Voyage" is an interesting cue consisting of dark atmosphere, a soft low bass rhythm, and a wailing electric guitar.  If it weren't for the incredibly dissonant cue immediately afterwards ("Chef's Head"), it could easily have been something out of a Michael Mann movie.  The dark "Finale" is soft and somber, and adequately mirrors your emotions when the film is done: you're not gleeful and happy.  This isn't a movie that really entertains you; it drains you.  This score drained me somewhat as well - I sincerely doubt that I will pop this in for another listen anytime soon; it took that much out of me.

The mixing of the score is interesting.  The cues tend to blend into each other, which made the "Ride of the Valkyries" and "Suzie Q" cues all the more interesting, since they went right into each other - and it worked!  The previous soundtrack release was filled with dialogue from the film and spread out over two compact discs. This version removes the dialogue, and adds two previously unreleased tracks ("Clean's Funeral", "Love Theme").  If you already have the previous release, chances are you can stick with it.  But if you don't have it at all, and want to take a musical journey into madness, then this 50-minute album is just right for you.