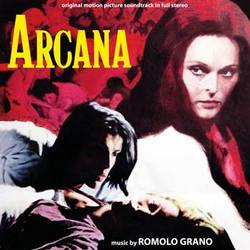 For Arcana, Romolo Grano composed an OST where the main score emerges as a sort of concerto in three movements performed by an orchestra (with an emphasis on winds), the voice of Edda Dell'Orso, and pieces played by a Hammond organ. The score develops into an impending classic theme with the modern sound of drums. Psychedelic and macabre atmospheres alternate with a colorful Taranta (folk music) to accompany the most memorable scenes in the film. This OST was arranged and conducted by Berto Pisano.

In L'uomo del tesoro di Priamo, the score transports the listener into the world of the archeologist Schliemann. The main score begins with a modern, danceable Greek flavor and is alternated with a charming archaic and Middle Eastern atmosphere with cord instruments, flutes and percussion, as well as sirtaki and bouzouki songs, a nineteenth century waltz and symphonic music. This OST was arranged and conducted by Gianni Oddi. For our CD we were able to use the master tapes in full stereo which had been previously recorded for the promotional albums released under the label Pegaso (listed as PEGASO PG7 e PEGASO PG14).