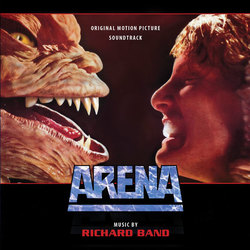 Intrada's latest album featuring the music of composer Richard Band presents his previously unreleased score to the 1989 Empire sci-fi film Arena. Band felt the music needed a thematic and driving futuristic feel to it like The Running Man, Blade Runner and Logan's Run. The music is at times strongly melodic, highly charged, rhythmically exciting and, at one point, even richly sensual. It's complex and scored in a symphonic idiom, albeit realized electronically. It's the score that inspired Band to completely redesign his studio to allow him to better incorporate electronics into his work.

Band included an array of synthesizers and electronic percussion in the stereo mix, and then added live percussion onto a third discrete channel. Working from the original 1/2" elements, Intrada mixed the separate percussion track into the center channel with the left and right synthesizer mixes and created a new composite two-track stereo mix of everything for the CD.