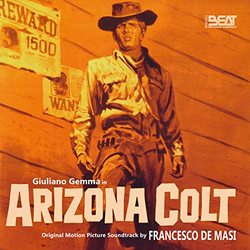 Sixth chapter in the series dedicated to the western scores composed by Maestro Francesco de Masi. An absolute cult score, one of the most sought by the fan of the composer and lovers of western music, Arizona Colt (1966, aka Il pistolero di Arizona), directed by Michele Lupo with Giuliano Gemma, Fernando Sancho, Corinne Marchand.

A soundtrack that could be easily defined one of the best ever composed by Francesco de Masi now is available in full STEREO (the original album selection) and with plenty of bonus tracks in a very good MONO. A very careful restoration by one of Beat Records most skilled collaborator, Claudio Fuiano, could pone remedy to the cranking problems that were present in all the tracks included in the original selection of the album, pay exception for two tracks that could not be restored. The result is a CD of 31 (!!!) tracks for more than one hour of great music, composed by a fully inspired Italian Maestro!

You can't say you know Francesco de Masi at full if you don't own a copy of that score! The CD is released in jewel box case with 8 pages booklet featuring original artwork by Daniele De Gemini, liner notes by Filippo de Masi (son of the composer), English edit by Josh Mitchell. Limited edition of 500 copies!!!