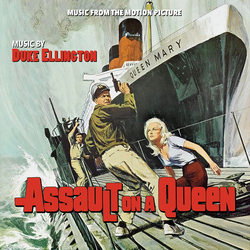 Assault on a Queen

Frank Sinatra was convinced to star in and co-produce the film under Sinatra Enterprises, his own production company. It was Sinatra's idea to hire jazz great Ellington to score the film. Their paths had crossed many times over the years and they had a strong mutual respect. In addition to his strong jazz background, Ellington had also gained some experience scoring films.

Assault on a Queen was shot in Florida and California in September and October 1965 and Ellington was announced as composer in mid-November. Because of his packed schedule, there was very little time for Ellington to write and record the score. During recording, Ellington had to leave to begin a concert tour overseas and work on the score continued with the participation of Nathan Van Cleave, a veteran composer and orchestrator who had often worked for Paramount.

In addition arranger-orchestrator Frank Comstock joined the team to assist in the arranging and orchestrating. Ellington did generate a fair amount of material, which he recorded with an 18-piece band, which included some legendary soloists such as Cat Anderson and Cootie Williams, Jimmy Hamilton, Johnny Hodges, Paul Gonsalves and Harry Carney, John Lamb and Louis Bellson, augmented by some of the West Coast's finest jazzmen, including Milt Bernhart , Conte Candoli, along with Buddy Collette and Bud Shank.

Five of Ellington's original recordings survived in the final film. The remainder of Ellington's work was adapted by Van Cleave and Comstock for the score as it now exists in the movie. The film's box-office failure, and the fact that so much of the final score was not purely Ellington's work, meant that no soundtrack album was issued in 1966. But Sinatra and Ellington remained friends, and a year later even recorded an album together.