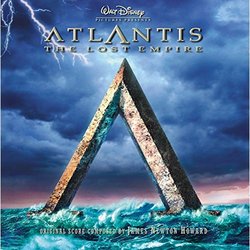 With the success of last year's Dinosaur - at least on musical terms - it came as very good news to me that James Newton Howard would be working again with the Disney animators on Atlantis (and is presently at work on next year's Treasure Planet).  As exciting as the score to Dinosaur had been, Atlantis offered entirely different musical opportunities - including humanity, and a Jules Verne-esque theme of underwater exploration.

Upon seeing the trailers for the film, the anticipation grew, and the bits of Howard's score used - particularly in the full-length trailer - further piqued my anticipation.  The good news is, all of the music from the trailers is on the disc, and the rest is just as strong. The score to Atlantis is a close cousin to Howard's Waterworld, which will be wonderful for those who've been following his career looking for a follow-up to that aquatic swashbuckler.  On top of that, though, it shows off his maturing harmonic language without even "showing off"; it just flows.

One can get a good feel for the score from about four cues on the album.  The first score cue is "Submarine," and it blew me away.  It opens by showing that this is indeed going to be an old-fashioned, deliberately cartoon adventure picture: the initial heroic fanfare is followed by some more playful music, including a march-tune homage to the likes of Williams and Bernstein.  Once the big theme starts, though, everything that came before, no matter how good, is forgotten.  It's one of the most heroic and awe-inspiring things Howard has ever written, and even though it's only presented in full twice on the album, it's well worth the price of admission for those and the variations.

"Leviathan" is an action cue the likes of which Howard fans have been waiting for since "Helen Frees the Mariner" in Waterworld, and in fact has quite a similar structure.  It's fast-paced, rousing, and contains plenty of bursts of the heroic theme. Over the course of the album, a second theme is introduced, a sort of awe-inspiring bit which works well in establishing the whole mystery element.  When the album came upon "The Crystal Chamber", I finally heard the haunting theme I'd loved so much from the trailers.  About as ominous as the album gets, this and the opening bars of "The King Dies" are a treat.  "Going After Rourke" features another full-on statement of the main theme, and leads into a series of fine finale cues.

I suppose you're wondering if I have anything negative to say about this score.  No, I really don't.  Even the bits that sound a tad like Goldsmith (particularly certain parts of Total Recall) don't sound enough like Goldsmith to be bothersome.  If I had to pick something to dislike, it'd be the song "Where the Dream Takes You."  The obligatory follow-your-dreams tune is attributed to Howard and songwriter Diane Warren, and performed by Mya, and it suffers from sounding like so much other disposable end-credits music.  Once you get past that, though, you're in for a very entertaining adventure score.