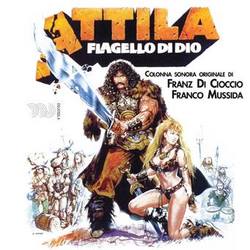 For our 5th appointment with our DDJ DLX series we have an exclusive stop in old world Segrate, border country between the Roman Empire and the place where ferocious barbarians dwell. Attila flagello di Dio (1982) is probably the most beloved movie by fans of '80s cult films and lead actor Diego Abatantuono, doubtless one of the most important protagonists of this genre that abandons the rules of time.

The score by Franz Di Cioccio and Franco Mussida is no less powerful. The first film score by two of the most important artists in the Italian rock musical landscape is right on target, dominated by typical PFM sounds, in great shape and containing the complete performance of this iconic score. Their straight forward rock score—melodic, rhythmic, of great quality both in composition and in its execution—is now available in this deluxe edition that features the original album program plus 17 unreleased cues: more than 70 minutes of absolute quality cult sound!

The CD comes in a jewel case with 16-page booklet designed by Alessio Iannuzzi featuring original artwork of the period, liner notes in Italian and English by Daniele De Gemini and Fabio Babini, mastering by Claudio Fuiano and external cardboard slipcase typical of this CD series!