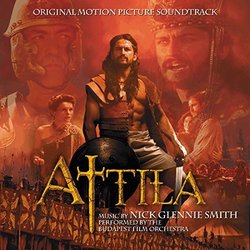 Performed by
The Budapest Film Orchestra

Attila was a made-for-cable miniseries focusing on the life of Attila the Hun, which aired earlier this year on the USA Network. Directed by Dick Lowry, who had directed a slew of TV movies, including the "In the Line of Duty" series of films, the film starred Gerard Butler as Attila the Hun and Powers Booth as Flavius Aetius, and owed much to Braveheart and Gladiator. The score by Nick Glennie-Smith is a fun action score, but it too is clearly inspired by Gladiator and other Media Ventures action scores.

"The Legend" is one of the longer (6:30) cues, and it's loaded with Glennie-Smith's touch. Considering he was one of the principle composers on The Rock and other Media Ventures action projects, that action-touch is clearly evident in much of the score. The music is highly thematic, but only somewhat exciting; the strong similarity to Gladiator (and therefore Holst's "The Planets") is a little too obvious for my liking. But the strong themes abound throughout the score: "Attila The Man", "N'Kara's Theme", "Attila The King", and "Ildico's Theme" all sport themes you can hum.

The action cues are definitely the highlights of the album: "Battle", "Duel To Death", "Battle Of Orleans", and "Attila Attack" are pure fun, and worth the cost of the album. There are also a bunch of more emotional cues on the score as well. "To Rome", "Wedding Day" and the stirring finale in "The King Is Dead" all allow Glennie-Smith to flex his musical muscles. One major advantage this score had over the other Media Ventures projects is that the score never felt synthesized or fake. Performed by The Budapest Film Orchestra, the performance is top notch and very real indeed. The soundtrack is released on the Super Tracks label, and is available from http://www.supercollector.com/. If you are debating between Attila and More Music from Gladiator, go for Attila. It may be similar in style, but at least it's something new.