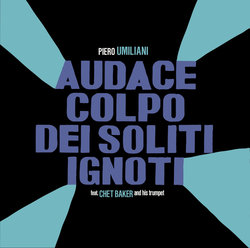 First ever issue in its entirety for this indispensable score by Italian cinematic jazz-father Piero Umiliani, obtained by having access to the original reels with the complete soundtrack recording. Top class Italian crime jazz composed for a 1959 comedy directed by Nanni Loy. Chet Baker, who was at that time in Italy, joined Umiliani's octet with his unmistakable trumpet for a red-hot session in October of 1959 in the RCA studios in Rome.

Besides his cool and dreamy solos, this recording includes a colorful and high caliber squad of musicians such as Roberto Pregadio, Berto Pisano, Franco Chiari, Gino Marinacci, Livio Cerveglieri, Nini Rosso, Marcello Boschi, to name a few. It is the synthesis of a national jazz scene in full artistic growth. This Four Flies edition finally gives us for the first time the opportunity to listen to the whole gamut of music recorded by the master Umiliani for Audace colpo dei soliti ignoti, including rumba, jazz, mambo and noirish atmospheres. A total masterpiece by Piero Umiliani is back!