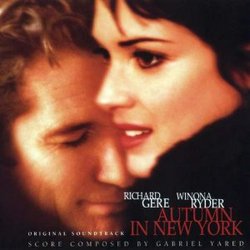 The adage goes, "if it's not broken, don't fix it". That same philosophy might apply to Gabriel Yared's latest work for Autumn in New York. What worked for The English Patient, City of Angels, and Message in a Bottle seems to work here as well. Headed by four enjoyable songs, the album contains over forty minutes of score, and Yared does what we expect him to do with a romantic film of this type—provide a highly effective score evoking images of love, drama, and Autumn.

The first four songs are a mixed bunch stylistically. The upbeat "Beautiful" is sung by Jennifer Paige, which is followed by the jazzier (and smoother) "Getting Some Fun Out of Life." The title song, "Autumn in New York" is crooned out by Yvonne Washington, and its relaxing jazz bass line and soft percussion is just perfect. The last song on the album before we hit the orchestral score is the romantic ballad, "Our Love Never Ends." Piano and strings are all Sydney Forest needs to accompany her, and it's a rather sad and emotional song.

Now we enter Yared's section of the album. Right off the bat, you can tell this is going to be a good one. His soft piano theme slowly melds with the strings, and the woodwinds slowly come in with the occasional harp pluck—almost the same type of orchestration he did in The English Patient. In fact, in "Elegy For Charlotte," we suddenly have vocals added to the score, provided by Miriam Stockley. While I'm not sure what language she is singing in, it fits perfectly into the melody and adds to the already enjoyable score. Just when you don't think it can get any better, it becomes a duet—and then it's just magic!

Most cues focused on the piano/strings emphasis, with the occasional saxophone ("Lunch") adding a bit more texture and reminding people that this is New York City—not just some other place. I have to admit that much of the score gets lost in itself—it was difficult to differentiate between many of the cues, as they generally sound alike. But they all have that high quality romanticism that we've come to expect from Yared.

The score to Autumn in New York is certainly as romantic a score as they come. While it's not as obvious a score as Titanic's was in pulling the heartstrings, Yared's mastery of the orchestra once again proves that he can compete with the best of them. It's nowhere near as riveting or dark as The Talented Mr. Ripley, but then, this was a completely different type of movie! Running almost an hour long, you really can't do wrong with this solid album released by Hollywood Records.