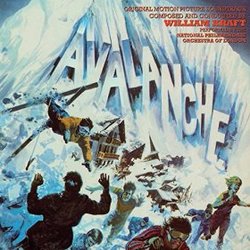 BUYSOUNDTRAX Records presents the original motion picture soundtrack to Avalanche on compact disc for the first time, featuring music composed and conducted by William Kraft, performed by the National Philharmonic Orchestra of London. Avalanche contains the original 1978 album program assembled by the composer and also includes a selection of outtakes as bonus tracks, from elements in the composer's archive, professionally mastered by James Nelson of Digital Outland.

The 1978 disaster film, written and directed by Corey Allen, produced by Roger Corman, starring Rock Hudson, Mia Farrow, Robert Forster, Rick Moses, Barry Primus and Cathy Paine, tells the story of a group of vacationers at an exciting new ski resort in the mountains of Colorado who are forced to face the brunt of Mother Nature's wrath in the form of a powerful avalanche of snow. The film follows the efforts of the survivors to pull together despite their differences and stay alive long enough for rescue services to arrive.

Released towards the end of a successful cycle of disaster films that included The Poseidon Adventure and The Towering Inferno, producer Roger Corman was looking for a composer who could provide a large scale orchestral score for his film and he turned to composer William Kraft who, at the time, was building a successful reputation for himself as a composer and conductor, as well as a master percussionist with the Los Angeles Philharmonic Orchestra. For Avalanche, Kraft chose to center his score around the central conflicts of the film: Man's destruction of his environment in his attempt to manipulate Nature instead of being one with it and the human relationships in the film. Performed by the National Philharmonic Orchestra of London, the composer deftly uses all the colors of the orchestra to highlight the dramatic elements of the story.

William Kraft (b. 1923, Chicago) has had a long and active career as composer, conductor, timpanist/percussionist and teacher. He is Professor Emeritus at the University of California, Santa Barbara, where he served for 11 years (1991 - 2002) as Chairman of the Composition Department and Corwin Professor of Music Composition. From 1981 - 85, Mr. Kraft was the Los Angeles Philharmonic's Composer-in-Residence. During his residency, he was appointed by executive director Ernest Fleischmann to serve as the founding director of the orchestra's performing arm for contemporary music, the Philharmonic New Music Group. Mr. Kraft had previously been a member of the Los Angeles Philharmonic for 26 years; eight years as percussionist, and eighteen years as Principal Timpanist. For three seasons, he was also assistant conductor of the orchestra, and thereafter, frequent guest conductor.

Mr. Kraft has received numerous awards and commissions, including two Kennedy Center Friedheim Awards (first prize in 1990 for Veils and Variations for Horn and Orchestra, and second prize in 1984 for Concerto for Timpani and Orchestra; two Guggenheim Fellowships; two Ford Foundation commissions; fellowships from the Huntington Hartford Foundation and the National Endowment for the Arts; the American Academy and Institute of Arts and Letters Music Award; the Norlin/MacDowell Fellowship; the Club 100 Distinguished Artist of Los Angeles Award, the ASCAP Award; the NACUSA Award; the Eva Judd O'Meara Award; first place in the Contemporary Record Society competition; commissions from the Library of Congress, U.S. Air Force Band, St. Paul Chamber Orchestra, Kronos Quartet, Voices of Change, the Schoenberg Institute, consortium of Speculum Mucicae/San Francisco Contemporary Music Players' Contemporary Music Forum, The Boston Pops Orchestra, consortium of Pacific Symphony/Spokane Symphony/Tucson Symphony, the Los Angeles Philharmonic, among others. His works have been performed by the New York Philharmonic, Boston Symphony, Chicago and Philadelphia Orchestras, the Los Angeles Philharmonic, and other major American orchestras as well as in Europe, Japan, Korea, China, Australia and Israel. Recently completed recording projects are with the Czech Philharmonic, New England Conservatory and the Royal Liverpool Philharmonic.