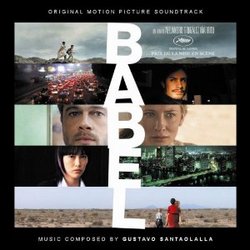 Reviewing film scores can be a frustrating art. Too often the releases I get to review are nothing more than a collection of short cues culled from the movie and put together in a seemingly random order. From these small nuggets I\'m supposed to decipher the composer\'s language for that particular film, all without the syntax of the language or images the music was to accompany. At best, I can give you an impression of the art, but many score CDs do not exist to provide you a dynamic listening experience.

Into this strange environment steps Gustavo Santaolalla\'s two-disk release accompanying Babel. Notice I did not say "score" or even "soundtrack;" this is a recording that defies such neat categorizations and instead takes you on a sonic journey. Babel exists to make you think, make you remember, but most of all make you listen, and in doing so crafts one of the most rewarding scores of the year.

The film Babel is the third picture in Alejandro González Iñárritu\'s trilogy that began with Amores Perros and 21 Grams. The story follows three separate strands in three separate places: the Moroccan desert, the U.S./ Mexico boarder, and Tokyo. As he did on the previous films, Iñárritu put together a collection of music, a soundtrack to the film\'s creation, and gave to cast and crew. And, as on the previous films as well, he hired Gustavo Santaolalla to compose the score and help find music and musicians that would match the film\'s tone. This unique approach to filmmaking, in which the music is intimately a part of the creative process, resulted in a rich, satisfying, integrated soundtrack that truly captures the film\'s spirit while standing firm on its own.

As the film interlocks lives in three parts of the world, Santaolalla interwove music from those three regions and beyond among his original compositions. So, you get the Norteño sound of the accordion and the bajo sexto from "Los Incomparables" sitting side-by-side with Japanese composer/songwriter Ryuichi Sakamoto and the recently deceased (and sorely missed) Nubian musician Hamza El Din, who blended Arabic and Nubian sounds. From this description you would think the end product doesn\'t work, but it does magnificently. There is a vibrancy that occurs with these disparate musics inhabiting the same space. It allows us to hear that honest musical expression is not so different no matter its medium. Besides, any soundtrack that features David Sylvian is doing something right.

Connecting these artists and songs is Santaolalla\'s score. Although the composer\'s score for Brokeback Mountain was showered with praise, I was unmoved by it. The repetitive guitar motives lacked the movie\'s emotional punch. But for Babel, Santaolalla moved beyond his signature guitar-heavy score by learning an Arabic guitar, the oud. Ok, it doesn\'t seem like much of a move, but when combined with the influences he derived from the musicians on the soundtrack, the result is startling. The opening cue "Tazarine" begins softly with a sample of Arabic chanting intercut with oud melodies. You keep expecting it to go somewhere, but it never does. It is simply a meditation on the connection among musics, and ultimately in the film among peoples. But this give and take between instruments and thus traditions sets the scene for the recording\'s worldwide soundscape. Just listen to "The Blinding Sun," which mixes a martial drum pattern with sampled Mexican music receding into the background; or "Walking in Tokyo," in which an Arabic melody plays over an electronic accompaniment; or "Tribal," which could be taken directly from North Africa. It is the addition of the other instruments behind Santaolalla\'s guitar or in place of it that give this recording life and depth.

As a CD, Brokeback Mountain was a good listening experience, but the score existed as mere filler; here the score unifies and comments on the rest of the music to make an organic whole with each composition lifting up the others. The sum is truly more than its parts.

Santaolalla has done something few before him have - he has devised a soundtrack release that captures the movie\'s language and holds together, and in some ways works even better, on its own. Babel is one of the most refreshing and exciting scores/soundtracks of the year.