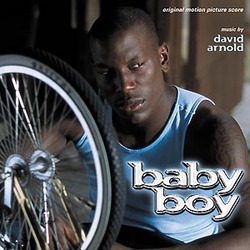 In this follow up to Boyz N The Hood, John Singleton takes us back to the same neighborhood where we met Tre, Doughboy, Ricky and Furious. The plot of this movie revolves around Jody (Tyrese Gibson) a misguided 20-year-old African-American.  This film intensely focuses on the complex social and political issues that face Jody as he attempts to take on the commitments of real life.  Jody lives at home with his mother and he has two children by two different women.  He is trying to leave the house and start a new relationship with his current girlfriend, but his other child's mother tries her best to hold him back.  Jody finds himself struggling against other odds as well: his mother (A. J. Johnson) is dating a reformed "Old Gangster" (Ving Rhames) who is strongly pushing for Jody to leave the house; Jody's best friend Sweetpea (Omar Gooding) is in and out of jail and trying to get back into the gang life.

David Arnold composed the film score for Baby Boy.  Please do not confuse this score with the soundtrack featuring songs by Snoop Dogg.  The entire thing I find confusing about the soundtrack vs. score issue is that there are too many hands in the pot when it comes to the music surrounding this picture.  Sony/Columbia Pictures released the movie and Universal Records released the soundtrack.  Varese Sarabande released the score.  Sony hosts a Baby Boy web site that links to Universal Record's www.babyboymusic.com - and nowhere on any of these sites is there any mention of the score or its composer.  If you are a true movie music lover then you can see where this issue becomes truly frustrating when you are trying to research things.  Luckily for us, in this age of the Internet, sites like SoundtrackNet exist to help us answer our questions.

The score seems a little out of place for David Arnold, who has written music for films such as Stargate, Independence Day and Godzilla.  Some extremists may try to raise an eyebrow at the fact that Arnold is a caucasian who wrote music for a "black" film - but such a narrow minded view could be quickly dismissed since he also wrote the score for the remake of Shaft in 2000.  Although the score for Baby Boy may not get as much notoriety as it deserves, it serves as another strong example for showcasing the wide musical talents of the composer.

The score itself is rather smooth and flows nicely from track to track.  If it weren't for the age of digital music, you could easily lose sight of which track is which.  The majority of the score has a smooth, Urban/Latin Jazz feel to it, emphasized by the use of electric bass, organs and a light percussion of bongos or cymbals.  Occasionally a nice motif with a Gospel sounding organ kicks in to add to the atmosphere of the album.  A good example of this combination is in "Meet Melvin" where we are introduced to Ving Rhames's character.  The music clearly helps to propel Rhames onscreen presence and lend credibility to his old-school days as a gangster.

Throughout other aspects of the score orchestral strings are introduced to add strong sentiment to the piece such as in the case of "Juanita".  Although this piece is only 54 seconds long, it contains a great deal of emotion from beginning to end.  It is the composer's use of different styles and instruments like this that make the score even more noteworthy.  For another good example of how Arnold blends funk and orchestra, take a listen to "Home Truths".  This piece starts with a bold funky organ aided and strong drumbeat.  A minute later the strength of these elements fades as a softer orchestral movement flowing into the foreground transcends them.  Just as your mind is trying to adjust to the change, the funk kicks in again and nicely finishes off the piece.

If you enjoyed Boyz N The Hood, then you should see this movie as well.  If you want to open your mind to a good mix of musical style and culture, then you should definitely check out the Baby Boy score - even if you haven't seen the movie yet.