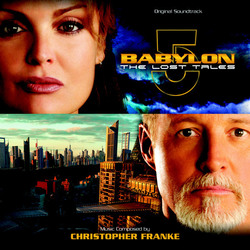 Babylon 5: The Lost Tales displays strong clinical signs of runner\'s fatigue. After a five-year series, five made-for-television movies, and an aborted spin-off series, the stamina is gone and Christopher Franke shows a definite lack of inspiration on this one. Granted, the choice to replace Franke by Evan H. Chen for A Call to Arms and the spin-off, Crusade, was met with unilateral disdain, so it is a relief to see Franke back being the keyboards. The results, however, might make one long for the golden days of the show.

Before I start tearing into The Lost Tales, I feel like a disclaimer is in order. I was a big fan of the show when it aired. J. Michael Straczynski, B5\'s creator and almost sole writer, is an immensely talented author who brought the show to life with a unique combination of Shakespearean speeches and down-to-earth bickering amidst a backdrop of epic struggles and political power plays. He has since continued to show his talents writing The Amazing Spider-Man where his flair for pitting the ordinary man against incalculable odds serve him well. Christopher Franke, formerly of Tangerine Dream, was brought in to score Babylon 5 and he did, in my opinion, an admirable job, crafting a sound for the show that was somewhat unique: harsh clashes of percussive dissonance mingled with ethereal melodies clad in noble harmonies, the orchestra constantly surrounded by dense clouds of synthesizers. Franke\'s position as founder of Sonic Images allowed him to release numerous albums of his scores to Babylon 5 at the show\'s pinnacle, most of which were episodic releases containing the entire music for a given episode in chronological order. The high points of these releases were numerous, from the action and suspense of No Surrender, No Retreat, to the bitter mournfulness of Sleeping in Light and the engaging thrills of Endgame. The second volume was especially spectacular, the four main title sequences serving as bookmarks in between 10-to-15-minute suites of music extrapolated from the best moments of the show, including Franke\'s early renditions and explorations of what would become the fifth season\'s main title overture.

Unfortunately, The Lost Tales never lives up to those memories. If the original Babylon 5 scores were like flying in space, this is the outdated flight simulator. Franke\'s score here sounds like an afterthought: it meanders in the alleys of banal and lackluster underscore, everything the original music was not, and is punctuated by a forgettable, video-game-style "Main Title" that pales in comparison to the seasonal main titles and even, perhaps most of all, to Franke\'s own main title theme to the aborted Babylon 5 video game by Sierra which was at once rousing and vivid. The album opens with a corny and overwrought rendition of the "Dying Station" theme heard in Objects at Rest and Sleeping in Light, overly orchestrated and dense with melodrama, a powerful anthem that made quite a few people weep when they heard it over the shots of the station going up in flames but which, here, sounds like a lesser composer took it up and tried to amplify its power to the nth level. "Intro 1" also serves as an introduction to a new synthesizer: very basic, dated, and distracting, it does nothing to help the score. Following the 30-second "Main Title", we are left with carcasses of themes and boring harmonies and nothing onto which to cling. The second half of the album is marginally more interesting, but Franke introduces ideas and loops dangerously close to the realm of electronica and dance which have the effect of not modernizing B5\'s music but of souring it into cheese. The second epilogue gives us respite in the form of a quiet rendition of the "Dying Station" theme, interrupted by the dated synthesizer, while the "End Credits" sequence squeezes together the Season 5 Main Title Theme and the new material from The Lost Tales\' "Main Title".

It might not sound fair to compare this latest outing to the new Battlestar Galactica. Indeed, their musical approaches are worlds apart. However, a science fiction show like Battlestar Galactica manages to produce a score that is both fresh and highly effective and, most of all, extremely memorable. Even if one eschews such a comparison, Franke here shows a complete lack of inspiration compared to his previous work on the series. Gone is the thrilling, pounding percussion of space battles and the noble, striking themes of old; Babylon 5: The Lost Tales is content to drift in a sea of insipid harmonies and background noise. For anyone interested in checking out the aural universe of B5, I would say out with the new and in with the old: Babylon 5: Volume 2 - Messages from Earth represents the pinnacle of Franke\'s role in the series while The Lost Tales is but a pale shadow. Lorien\'s last question to Sheridan was, "Where are you going?" It might be a wise question to ask regarding the series and the answer just might be to call it quits.