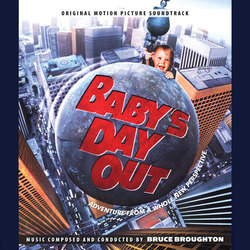 Bruce Broughton's 1994 score for 20th Century Fox's Baby's Day Out is a largely comic triumph of underscoring, elaborating on acres of humorous action sequences and leading into emotional directions when required. A favorite of the composer, however slapstick the action, Broughton's music is unfailingly elegant, never talking down musically. At times eye-winking, tongue-in-cheek, sometimes sweetly thematic, often adventurous and with a joyous spirit that will bring a smile to any listener, the score is a major Broughton work.

Originally released as a promotional album featuring 39 minutes of highlights, this premiere commercial release features 80 minutes of music—a running time that is 20 minutes short of the entire film's running time. The film is nearly wall-to-wall music, and this release is assembled and mastered under the composer's supervision from the digital two-track scoring session mixes made by Armin Steiner at Twentieth Century Fox Studios in May and June of 1994.