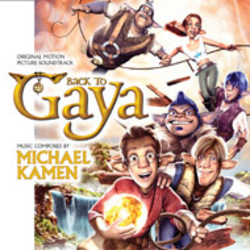 We are proud to announce that we will release the legendary Michael Kamen's original orchestral score from the German fantasy animation Back to Gaya on CD and online.

The completion of the score was an extraordinary achievement as the composer tragically, in the midst of composing the music for the film, passed away. Committed to fulfil the vision of Kamen, complementing the music he had written specifically for Back to Gaya with a selection of his unused compositions from previous film projects, a team of composer and orchestrators headed by Kamens long-time associates Steve McLaughlin (producer/recording engineer) and Christopher Brooks (producer/music editor) finalized the score to fit the film perfectly.

MovieScore Media's album features 62 minutes of grand orchestral, adventurous and highly entertaining Michael Kamen music performed by the London Metropolitan Orchestra. In honour of the late maestro, MovieScore Media will share a portion of revenues generated by the album with Mr. Holland's Opus Foundation, which was founded by Michael Kamen in 1996 as his commitment to the future of music education.

The first edition of the CD is limited to 1,000 copies.