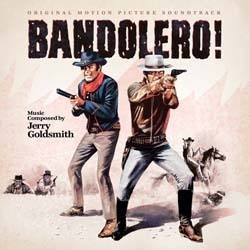 La-La Land Records and 20th Century Fox continue to explore Jerry Goldsmith's Western side with yet another Old West romp, Bandolero!, starring James Stewart, Dean Martin, Raquel Welch, and (one of the most underrated actors ever) George Kennedy.

Produced by Nick Redman and Mike Matessino, with Matessino handling remastering duties, this long out of print score makes its way back into the film score collecting spectrum with some improvements over the past releases, including a fun extra bonus track of the Main Title sans the whistle. Insightful liner notes by Julie Kirgo and fantastic art direction by Jim Titus make this a must buy for any fans of Western scores or Jerry Goldsmith!