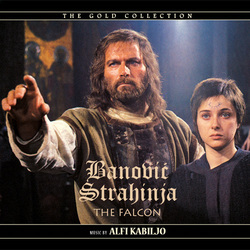 Kronos Records The Gold Collection is very proud to present a world exclusive: the soundtrack CD of Vatroslav Mimica's 1981 epic film Banovic Strahinja (The Falcon) for the first time ever in any format.

The music is as rich and as colourful as the film it was composed for. Kabiljo's immense knowledge of music transpares in this score, from the medieval sounds representing the Serbs to the Oriental dance or Green Swamp themes to represent the Ottomans. The fantastic performances of Ensemble Universitas Studiorum Zagrabiensis were also an important ingredient to the success of the score. On the festival of Yugoslav films in Pula (Istria, Croatia) in July 1981 Kabiljo got "The Golden Arena" award for best music.