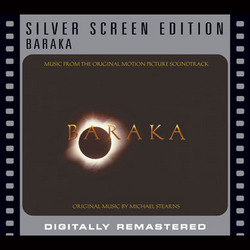 This cult favorite soundtrack has been digitally remastered and now includes the opening theme of the film, which was not available on the original release. Composer Michael Stearns rediscovered the original recording after more than 10 years, and remastered it exclusively for this release.

The evocative score for the heralded documentary Baraka, with music from Michael Stearns, Dead Can Dance, L. Subramaniam and several others, has recently been remastered and reissued, something worthy of note for fans of Stearns's work in the New Age music genre and others of the genre of world music. The film itself, directed by Ron Fricke and initially released in 1992, chronicles a myriad of ancient rituals and cultures, nature in its objective glory and also the tragic trappings of mankind's terror upon the planet in the forms of war, mining and industrialization. With no linear plot and no dialogue, the role of the music is elevated tenfold to be the voice, the joy and the soul inhabiting the visuals onscreen. The combination proved to be intoxicating to audiences and critics worldwide, who praised its genuinely innovative and inspiring sense of purpose.

The music on the album opens with the mysterious bonus track "Nepal Morning," by Kohachiro Miyata, which utilizes a Japanese bamboo flute, akin to a shakuhatchi but in a lower range. There are gentle rustlings of the wind, birds and a gurgling stream in the background and then halfway through ethereal synth chords pad out the meditative soundscape. This state bleeds into serenely into the following selection, "Mantra / Organics." by Somei Satoh, playing to images of indigenous people in prayer and meditation. This second track consists of slowly shifting electronic textures, like calm waves on the beach at dawn, bringing a sense of stillness and reflection to the listener. No matter what else the album may bring, the audience must be able to keep this still and open current running inside them, in order to truly experience each upcoming moment. "Wipala," by Inkuyo, adds pan pipes, rainsticks and guitars to the mix, the tempo increasing to a traveling jaunt as the next leg of the journey begins.

The tone shifts to something more ceremonial and reverent in the track "The Host of the Seraphim." A bass drone is joined by voices, the most prominent being that of Lisa Gerrard, from the defunct group Dead Can Dance and now of film composing fame (Gladiator, The Insider). Some film score fans may feel her vocal abilities have outstayed their welcome at this stage of the game, but in 1992 she brought an emotionally searing and fresh quality to this score, having previously been known solely to fans of Dead Can Dance and her solo albums.

"Village Dance" is the first track attributed to Michael Stearns and picks up the pace again, with various native chants and breathy vocalizations energetically performed with minimal percussive instrumentation. The synth textures return in L. Subramaniam's "Varanasi Sunrise," bringing back a calm center. Faint Middle Eastern vocals and instrumentation join in halfway through, adding to the mysticism. In Anugama & Sebastiano's contribution, "African Journey," percussion takes center stage in a vibrant and gleeful display, truly propelling the listener forward through the hub of the album.

Next arrives "Rainbow Voice" by David Hykes, a beautiful yet eerie work for solo voice which verges on sounding synthetic, something akin to nasal tones of Inuit singing. The music of Michael Stearns returns in "Monk with Bell," an accurate description of its focus, with the sonorous ringing of various bells, large and small, but in an uncluttered, contemplative manner. In "Broken Vow," the Monks of the Dip Tse Chok Ling Monastery surge forth with their strange horns and drums, and the odd addition of Scottish bagpipes, to bring the energy level back to a fervor for its first half while the second half of the track, "A Prayer for Kala Rupa," settles into strange, ethereal tones.

The final two tracks are composed by Michael Stearns, bringing back his electronic textures, similar to the opening "Mantra / Organics" and just as absorbing. The "Finale" plays almost as a lilting, glowing trip to the heavens, while the "End Credits" adds some clanging percussive instruments in a rhythmic pattern. This seemingly roots the experience of these modern electronic instruments and their emotional effect in the deeply ancient past of the first human musical rituals. Baraka is certainly a winning compilation for fans of both New Age and world music and so should be a welcome sight back on the record shelves.