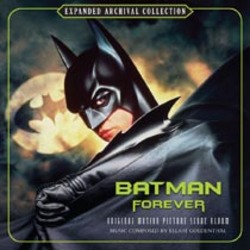 Goldenthal's robust orchestral score honors The Caped Crusader with a powerful theme that is pitch perfect whether appearing as a stalwart march or brooding character study. The rest of the score follows suit, effectively supporting the film's array of characters and large-scale action with complex, memorable themes and motifs.

This remastered release has been radically expanded, more than doubling the running time of the original 1995 score soundtrack release (the remastered 1995 score album is presented here as well). Produced and supervised by Elliot Goldenthal, produced for La-La Land Records by Neil S. Bulk and Dan Goldwasser, and mastered by James Nelson, this 2-CD limited edition release features exclusive, in-depth liner notes from film music writer John Takis and is a must-have for any film-music enthusiast.

This is a Limited Edition of 3500 Units.