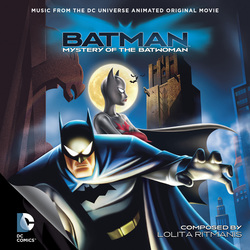 Batman: Mystery of the Batwoman

Acclaimed composer Lolita Ritmanis returned to the Batman: The Animated Series universe to craft a thrilling and atmospheric score with jazzy, noirish highlights—perfect for this feature-length tale in which Batman and all of Gotham are forced to reckon with a new costumed vigilante on the scene, Batwoman! Produced by John Takis and mastered by James Nelson, this special release of 2000 units also features bonus tracks and the score to the animated short Chase Me. In-depth, exclusive liner notes by John Takis and Bat-riffic art design by Dan Goldwasser round out this exciting release!