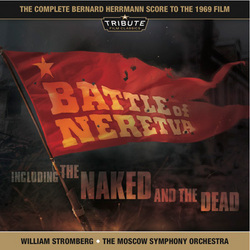 Battle of Neretva / The Naked and the Dead

The Tribute Film Classics team delivers a knockout recording of a great Bernard Herrmann find, the complete score for the 1969 WWII drama, Battle of Neretva. Written for full orchestra with expanded brass and percussion sections, the score mirrors the tone of the story, and features suspenseful moments of subdued tension, bittersweet string interludes, trudging music of despair for the displaced evacuees, but most of all, incredibly powerful, exciting, and relentless battle music and marches.

The score as heard in the film was, for the most part, butchered. Almost none of the cues are heard in their entirety, and some were dropped altogether. Although an original soundtrack CD was issued on the Southern Cross label, it contained only about thirty minutes of the score. This new Tribute recording doubles that amount, and presents the complete versions of all the music heard in the film, plus several unused cues, all in exceptionally well-recorded, thrillingly detailed sound. For those who have only heard the old CD, and especially those who have only seen the severely edited movie, this new recording will be a revelation. Astute listeners will notice that Herrmann "revisited" a few of his earlier works, reworking a few cues from previous scores, most notably On Dangerous Ground (including the famous Death Hunt, which receives a riveting, adrenaline-filled performance here).

Also included are highlights of Bernard Herrmann's score for another WWII film, The Naked and the Dead (1958), featuring a pounding, determined main title march that is a showcase for the massed brasses and percussion. Other portions alternate between slower atmospheric pieces for the soldiers' treks through the jungle, and piercing, angry cues when they engage the enemy.

The 32 page booklet designed by Jim Titus is filled with extensive notes by Jim Doherty and Kevin Scott on the films and scores.

The expert production and distribution of this remarkable Tribute Film Classics CD is by Screen Archives Entertainment.