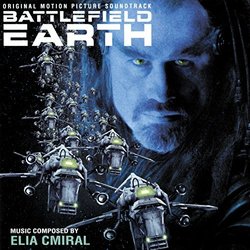 Let's be honest. Battlefield Earth was a pretty bad movie. Sure it was neat visually and had a decent production design, but the story was bad, the acting was terrible, and let's not even approach John Travolta's performance at all of the press junkets where he comes across as convinced that the film is really good. Composer Elia Cmiral, however, might have been one of the few people who worked on the film who still has his dignity. Not only did he score this "film", but he managed to create a score that took advantage of a huge orchestra and choir. Not bad considering that the film tanked at the box office - at least Cmiral got his score written, recorded, and paid for. To top it all of, the score is pretty good too!

The main title, "Battlefield Earth Theme" is basically the main heroic theme that we'll be hearing throughout the film. It's simple and powerful, and it sticks in your head. You can't ask for more than that! Immediately following that cue is "The Dome" - which takes advantage of the choir and orchestra as we see that the remains of Denver are encased in a huge dome (well, it's not curved, but that's what it's called). The sheer magnitude of the structure called for an epic-sounding choir and orchestra, and that's what Cmiral delivers.

There are plenty of expository cues, which really don't do too much except provide the appropriate amount of underscore for tension, action, and drama. These cues integrate orchestra, choir, and synth effects and rhythms. Cmiral makes excellent use of percussion - his work on Ronin is a testament to his abilities on that front. "Jonnie's Enlightenment" is a great example of the tension, drama, and thematic abilities that Cmiral was able to score into the film. "Commence Revolt" contains plenty of heroic brass, and the integration of the main theme serves it's dramatic purpose flawlessly. It even has some good action when the choir comes in. Well, at least the score implies that "good action" would be occurring at that moment. Which brings me to one of the scores flaws.

This score - as it appears in the film - feels somewhat out of place. But that's probably because it's not at the same level as the film. It's about 300 times better than the film would allow, and for that reason, I would say (and have said to others) that this is the wrong score for Battlefield Earth - it's just too good for it. I'm not saying that this is the best score ever written, but it's pretty enjoyable and has all of the right elements for a sci-fi action score. It's just that it should have been used on another film. Mission to Mars had this same problem, and let's not even approach Supernova. "Revolt Continues" has more great action choir going on, and with "The Cavalry", "Air Battle", and "Trench Attack" Cmiral gets to flex his action fingers.

The album runs about 49 minutes long, and is a satisfying listen. I hope that people don't pass over the CD because of the film's plummeting box office receipts and scathing reviews - this is a score worth checking out. Overall, Cmiral wrote a score that has at it's heart a really solid theme, and the rest of the score naturally fell into place. It's just a shame that it was for this film, and not another one.