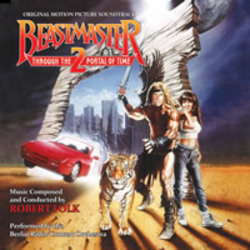 Beastmaster 2: Through The Portal Of Time - Remastered

To compose the music for Beastmaster 2, Sylvio Tabet brought in composer Robert Folk after having been impressed by his musical contributions to the cult horror film Tremors. From the very beginning, Tabet made it clear to the composer that he was under no obligation to reflect the music from the first Beastmaster film in his sequel score, as the new story was quite different from the original film. Folk's music gives the film a tremendous amount of energy, playing straight man to the film's humorous elements and lending credibility to its formulaic plot.

The story's mix of primitivism and modernity is reflected in the score's abundant sense of musical contrast, as Folk flavors Dar's barbaric world with broad musical strokes and violent orchestral interaction, emphasizing the Beastmaster's confidence while designing more sympathetic melodies for Jackie once she's become stranded in his primitive home. The Beastmaster 2 score was recorded with a 96-piece orchestra in former East Berlin—the reunification of East and West Germany having brought down the Wall that divided the city in October, 1990.

Previously released on compact disc in 1991 and out of print for many years, BUYSOUNDTRAX Records brings Beastmaster 2: Through the Portal of Time back to compact disc with remastered sound by Digital Outland. The booklet includes new liner notes by author Randall Larson, including new insights from composer Robert Folk on this exciting large scale orchestral score.

This release is a limited edition release of 1500 units.