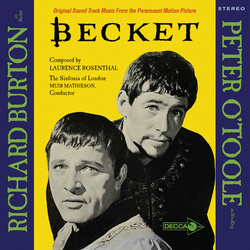 Intrada presents one of composer Laurence Rosenthal's masterpieces, the music to the 1964 Paramount film Becket. Perhaps his most distinguished score, it's hard to believe that it has not been made commercially available outside of its original LP issue until now. While the complete sessions have long since disappeared, Rosenthal had assembled a generous 40-minute program that captured nearly all the highlights of the score. Performed by the Sinfonia of London, Rosenthal's music does not attempt to literally recreate the music of the 12th century, although he did use authentic Gregorian chants. From the days of youth when Thomas Becket and King Henry II share a warm friendship to the bitter transformation that results ultimately in murder, Rosenthal ingeniously crafts a musical journey that follows the pair through the years. While the score recalls the late medieval style of the period and incorporates a Welsh folksong for the character of Gwendolen, cues such as the boisterous "Days of Youth" reflect a more modern approach when called for.

Although the original Decca master LP program was also missing, Intrada was able to locate a copy made from the LP master before it disappeared some years ago, in pristine sound quality, saving what is a classic score in the truest sense from languishing in obscurity any further.

Becket is the story of the friendship and eventual conflict between Thomas Becket and Henry II, King of England and western France from 1154 to 1189. As the picture opens, Becket has been murdered by Henry's barons, acting upon what they thought was the King's wish that they should "rid me of this meddlesome priest." From there the story goes back in time, telling the story from their youth and moving forward as it transforms into enmity and how it evolved all the way to murder.