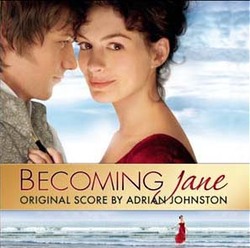 In little over a decade, Adrian Johnston has established himself as one of the UK\'s best, brightest and busiest film composers. His early collaborations with Michael Winterbottom on Jude and Welcome to Sarajevo foreshadowed a glut of television work, all of which has been met with acclaim and even an Emmy award (for 2002\'s Shackleton). With more than seventy titles to his credit since 1996, he has proven the composer of choice for period pieces in particular, but has shown astonishing versatility by tackling genres as diverse as comedy, horror, documentary and thriller in both feature-length and short forms.

His score for Julian Jarrold\'s 2007 film Becoming Jane is filled with luxurious melodies and rich orchestrations but, as is the case with the film it serves, there seems to be something missing, some indefinable spark that could have made it a more rewarding experience for the audience. In the film, some of that flatness was caused by the miscasting of the lead role and, no doubt, by some deficiencies in the script. In the score, it\'s harder to pinpoint exactly what\'s missing. Perhaps it\'s the absence of a truly memorable theme, despite a wealth of thematic material. Or it could be that Johnston\'s decision to structure the score roughly in two halves has robbed it of some cohesion.

There\'s no question, however, that this score is going to have its fans, and rightly so. The love theme is a lush and deeply romantic crowd-pleaser, featuring a lovely octave leap at its dramatic apex. It\'s a shame the theme doesn\'t appear until nearly half-way through the score, in the gentle \"Rose Garden\". It receives a more robust iteration for full orchestra in \"Runaways\", where the arpeggiated piano motifs underlying the string melody evoke an unmistakably similar moment from Dario Marianelli\'s Pride and Prejudice score (which was, incidentally, used for much of the film\'s temp tracking). The theme comes full circle in the final cue, \"A Last Reading\".

Also featured in \"A Last Reading\" is what Johnston himself has labeled the writing theme, which is used in the film to suggest Jane\'s muse at work. As with the love theme, it\'s under-utilised, serving only to bookend the score in the first and last cues. More prominent are the yearning motifs that pop up frequently. \"To the Ball\" marks one of the score\'s most emotionally charged moments, powerfully suggesting Jane and Tom\'s reluctance to show affection for each other. \"Distant Lives\", \"The Loss of Yours\" and \"To Be Apart\" are also full of yearning motifs, but sometimes come uncomfortably close to being simply miserable or dreary.

It\'s a relief when the mood picks up in the wonderfully urgent \"The Messenger\". As with the irrepressibly pompous \"Bond Street Airs\", it marks a radical departure from Johnston\'s otherwise delicate approach. Also outstanding are two folk dances, \"Basingstoke Assembly\" and \"Laverton Fair\", carefully selected by Johnston to add authentic period flavor to the scenes they underscore. Lynda Lee lends her rich soprano to a subtle and heartfelt performance of the aria \"Deh Vieni Non Tardar\" from Mozart\'s The Marriage of Figaro.

I look forward to seeing what Johnston will bring to his next project – Julian Jarrold\'s take on Brideshead Revisited – and all his future projects.

[Reviewer\'s note: I would like to acknowledge my reference to Michael Beek\'s excellent interview with Adrian Johnston, featured at the Music From the Movies website.]