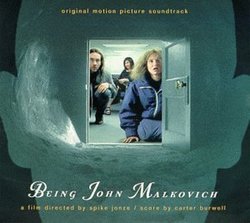 Being John Malkovich was my favorite film of 1999, and I'm sure I'm not the only person who feels this way. Even those who didn't care for it must acknowledge it's very uniqueness—it's very much a one-of-a-kind movie-going experience. Spike Jonez was able to make the smooth transition from directing music videos to a full-length motion picture with ease, and in the transition, the music involved was still key.

The film does not represent a new direction for Carter Burwell, but instead a determined study and expansion of musical language and ideas that he's been working on for about as long as he's been scoring for films. The cues are short, the orchestration sparse, and the melodies simple—but even so, one never feels as though one is hearing simply "filler" music. Working with a chromatic consonance that worked so effectively in Gods and Monsters, Burwell creates a melody that is at first almost forgettable in it's simplicity, but over the length of the score, becomes haunting and inexorable from one's mind.

This minimalist scoring technique is best heard in the first score cue on the album, "Puppet Love," and the film's finale, "Future Vessel" (a cue that made the end credits worth staying for!). Though heard only a few times over the course of the album—most notably in "Lotte Makes Love"—Lotte's theme is quite beautiful; a rising seventh-chord sequence that could go on to infinity.

There's more to the album than the score, though, and in this case, it's well worth paying attention to. Though Bjork's "Amphibian" is not exactly my cup of tea, it is tolerable, and I'm sure that it will grow on me upon more listening. The "Malkovich Masterpiece Remix" is reminiscent of one of the funniest scenes in the film, even if a bit annoying at times. Bartok's "Allegro" is a wonderful piece of music, used to great effect in the film, and should encourage the listener to seek out a full recording of "Music for Strings, Percussion, and Celeste". Finally, "Carter Explains Scene 71 to the Orchestra" is a very entertaining track which, in it's brevity, covers all that is in it's a title—a pleasant surprise.

All in all, a wonderful album - even down to the photo on the inside flap of the package. Burwell has proven yet again his mastery of the art of subtle scoring for somewhat less-than-subtle films, and as it did with what could be called it's companion score, Gods and Monsters, Being John Malkovich makes a brilliant film that much better.