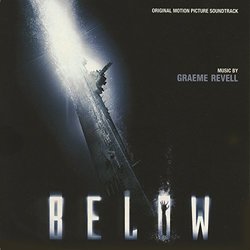 In David Twohy's follow-up film to his 1999 sleeper hit Pitch Black, he takes us under the ocean, and gives us a World War II haunted submarine thriller in Below.  Graeme Revell's score is heavy on the electronic ambience (and breathing sounds), employing an orchestra where needed.  "Stations Ready" is a tense cue that builds very nicely, and "Strange Forces" has a good integration of synth electronics with a rather tragic sounding orchestra.  When it's not atmospheric or action-oriented, the score tends to be dark and brooding, with almost meandering strings with little form.

The last 15-minutes of the album, starting with "Odell Solves The Mystery", is a veritable non-stop ride, with plenty of action and suspense.  "Facing the Truth" has a good resolution, while "Haunted By Dishonor" is a surprisingly well done dramatic cue, heavy on the strings.  The last track, "Safe Harbor" is a nice long track that embraces most of the best elements of the film score.  Slow to start, and with a few low-key moments, this score might not seem like much at first, but after a few listens, it grew on me.  You might want to let it grow on you.