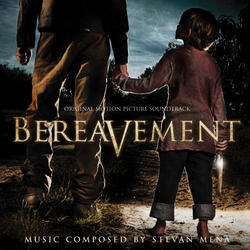 Bereavement continues the somber and melancholy feel of Malevolence, mixing thematic melodies and chords with unsettling ambient elements to underscore the desolate, isolated perils in the far from tranquil Pennsylvania countryside. To bolster the action, chase, and suspense there is also a healthy dose of frenzied arrangements, roars, and pounding chords. The film also features cello arrangements by composer Jeff Grace on a number of cues as well as a gritty ballad Acid Tears written by Bryan Harmony and Larry Werner, performed by the band Spitshine. This album is strictly limited to 500 copies and features beautiful insert designs created by artist/designer Luis M. Rojas, including a note from composer Stevan Mena.