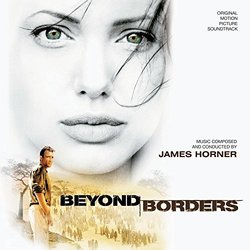 As a movie, Beyond Borders presented a quandary to viewers.  On the one hand, it wanted to be love story for the ages, set across long distances with obstacles for the hero and heroine to overcome in their quest for love.  On the other hand, it wanted to be a portrait of war-ravaged, disease inflicted, destitute areas of the world, urging its viewers to action on behalf of the people living there.  The movie's indecision and vacillation between these two desires evidently turned off many viewers and caused many critics to find it exploitive of the people and areas it presented.  Although James Horner's accompanying score, which samples freely from the music of the represented countries, could be considered exploitive as well, it actually is a step above the movie it accompanies.  Its elevation comes from its singular purpose.  Rather than focus on the romance between the two leads, as one would expect Horner to do knowing his oeuvre, the composer chose to focus on the people in those war-torn areas.  The result is a character driven and defined effort that is easily one of Horner's freshest and most original in recent memory.

The score's innovation begins in its structure.  Instead of simply presenting a series of cues named after key moments in the movie, Horner arranged the score into three distinct parts named after the movie's three major relief locations: Ethiopia, Cambodia, and Chechnya.  Each of these sections is further divided into four movements, each named sequentially one, two, three and four.  By using the locales for cue names, Horner betrays his compositional focus on the people groups.

Beyond this naming and grouping, Horner employs another structuring device as well.  The entire score is built on cycles.  Consider the first cue, "Ethiopia I."  It opens with floating synthesized chords and occasional drum hits.  Slowly, as the harmonies cycle, more and more instruments and voices are layered, creating a massive spiral.  This cyclic nature is manifested in the overall design.  Each of the three large sections follow a cyclic pattern.  The first two cues each feature pounding, percussion-based electronics and solo passages on instruments native to that region.  The last two cues are more traditionally romantic and sound more like Horner's usual work.  The third cue is the soft, introspective cue of the cycle, often employing strings and piano to evoke a plaintive emotion, while the fourth uses Horner's electronics, his strings and voices, to generate an emotional reaction from the audience.  However, always wanting an emotional climax, Horner plays with this cycle within a cycle structure by creating a subtle crescendo.  Each cycle is slightly larger and more musically and texturally involved than the last, building to a suitable climax in the Chechnya cues.

As hinted at above, Horner continues the score's innovations in his orchestration.  Each section is granted key instruments to mark it as unique from the others.  Ethiopia has chanting and wailing female voices, Cambodia has the sound of the gamelan orchestra, and Chechnya has resounding chimes and fuller string writing.  In fact, with the exception of "Ethiopia III" and "Chechnya IV," Horner abandons his overly lush, even maudlin romantic string sensibilities in this score in favor of more soloistic textures.  It is a refreshing change, but a startling one as well, resulting in a score that in many cases does not sound like Horner.  In fact, you could probably play a cue for a Horner fan, such as "Cambodia II," and they would be hard-pressed to say with absolute certainty that Horner was the composer.

Quite possibly the strangest cue on the score considering this feature is the next to last one, "Chechnya III."  The cue opens as one expects from the previous cycles, with a bed of lush strings and piano.  But the strings quickly disappear and we are left with a piano solo, but one not written by Horner.  It is Robert Schumann's "Träumerei," a movement from his Scenes from Childhood.  The song, whose name means "Dreaming," comes with no preparation and might cause a listener to think they had entered into that resting state.  Although its presence creates a beautiful moment, it is a bit incongruous with the rest of the score.

Beyond Borders was written for Martin Campbell, the director who coaxed The Mask of Zorro out of Horner a few years ago.  If Campbell can inspire the composer to create a third score with the spark of Zorro and Beyond Borders, then Horner should start working exclusively with him.  On only three or four cues does Horner resort to his staple of sentimental string melodies and synth choir voices; cues that diminish the level of this project considerably.  Yet overall, the score contains enough interesting ideas to cause this reviewer, who generally is underwhelmed by Horner's efforts, to give it a close listen.  The movie's box-office failure may have caused many to overlook this particular score, but you should buck the trend and check it out.