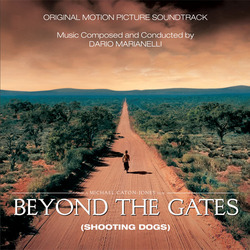 Beyond the Gates (Shooting Dogs)

Review: Beyond the Gates (Shooting Dogs)

I always find it interesting to hear a composer shedding a style with which he has garnered popularity and trying something completely different, especially when the end result is satisfying. Danny Elfman surprised quite a few people when he let go of the traditional symphonic orchestra and choir and started playing with weird instruments and electronics in the mid- to late-nineties; now, Dario Marianelli, best known to American audiences for the intricately-orchestrated Brothers Grimm and lush romance of Pride and Prejudice, seems to have found a new niche. Beyond the Gates (known around the world as Shooting Dogs) is one of three films he has scored that take place in Africa, and his lavish sonic world makes way for minimalism and a much simpler palette where single colors are as important as the interplay between ensembles used to be. It might represent a new phase in the composer\'s career, one just as exciting as the one that introduced him to American filmgoers.

Beyond the Gates tells the story of the 1994 Rwandan genocide in which 800,000 people were killed in a little over three months. A tragedy of that magnitude begs for a direct score that doesn\'t flinch and isn\'t flashy, and Marianelli delivers a haunting score that capitalizes on the beauty of the human voice backed by subtle electronic and organic drones. What makes the score even more powerful is the voice Marianelli chose as the music\'s anchor: that of Cecile Kayirebwa, whose songs the Tutsis listened to during the atrocity. A cue like "Remember Us" allows the strings to flourish under complex, interlocking vocal lines and the effect is at once beautiful and aching. More restrained cues, such as "Machetes", seem to pave the way for the massacre with a sound Marianelli used in V for Vendetta: it seems, to my ears, like a blend of low sitar drones and electric guitars on top of which the composer layers dense, modernistic harmonies. The Chorale de Kigali and The Voices of Kicukiro, Rwanda provide three "source songs" on the album—"Nyirigira", "Dufite Imana Ikomeye Cyane", and "Wari Mw\'isi"—the last of which is especially unsettling even in its short duration, as it features a calm, soothing sound exposing a certain innocence. The brass is used in a snarling fashion in "No Way Out", the only time Marianelli brings a distinctive European sound to the score (apart from the sparsely-used strings), and the final cue, "We Turned Our Backs", features the sole use of African percussion. Over the drumming, a choir hums, a male vocalist sings, and strings build simpler harmonies. This is bare bones material compared to the composer\'s Brothers Grimm but, what it lacks in orchestrations, it more than makes up for in effectiveness.