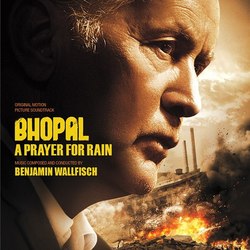 Bhopal: A Prayer for Rain

Performed by
The Chamber Orchestra of London

The original soundtrack album is being released by MovieScore Media and features The Chamber Orchestra of London recorded at Air Studios, conducted by the composer. Influences of local music are represented through the Tabla and the Bulbul Tarang (Indian Banjo) and an Indian flute playing the childhood theme which communicates life and hope. On the other hand, the score also features terrifying electronic textures representing the toxic chemicals suffocating the city. The album closes with the composer's own end credits song, "A Prayer For Rain," performed by Mary Lea.