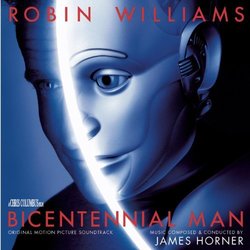 In the film Bicentennial Man, Robin Williams is a robot that over the course of 200 years discovers what it is to be human. Composer James Horner wrote the score to this film, over a year since his last film score (Mighty Joe Young). Many people have wondered what Horner did during the year he took off, and I'm sorry to say that doesn't appear that he was working on Bicentennial Man. At its core, this score is very well done, and has some great themes. But it also suffers from the overabundance of similarities to other Horner scores.

The first track on the album, "The Machine Age" provides us with one of the main themes from the film, but in a way that slowly builds with wonder and excitement. This is one of the better cues on the album, and it makes a nice stand-alone piece that would be great to hear in a concert environment. Much of the score is dramatic and romantic underscore; there are no action cues to speak of. But as with almost every James Horner score, there are quite a few lyrical themes that work very well for the film, and provide a great basis for the meat of the work.

All that good stuff aside, however, this score is way too similar to Horner's previous scores to be truly noteworthy. Sure many composers will reuse orchestration ideas, and even some themes, but Horner is one composer who continually gets flack for doing so. Does he do it more than others? Probably not - but it's talent for memorable themes which is also his downfall. Since the themes are so memorable, when works out a new one that is similar to the old one, it stands out much more than another composer's might. It's hard not to hear strains of Sneakers or *batteries not included in this score. "The Wedding" sounds suspiciously similar to "The Wedding" cue in Deep Impact, and the building drama in "The Search For Another" sounds disturbingly similar (almost note-for-note) to "For the Love of a Princess" from Braveheart.

Additionally, there is one last song here - the latest from James Horner and lyricist Will Jennings, sung (of course) by Celine Dion. (Didn't she go into retirement?) One nice thing about it is that Horner wrote the music, so it uses the main theme from the film. Unfortunately the lyrics are rather cheesy: "Laugh and cry, live and die….". It's almost as bad as what was written for The Mask of Zorro: "Race the moon, catch the wind….". The song has as much emotion as Al Gore, and seems to be more of a tacked-on attempt at another Oscar than anything else.

But that isn't to say that this album is bad - the music works very well for the film, and someone who has limited knowledge of Horner's work wouldn't find it to be too unoriginal. I have yet to find a Horner score that I really don't like - even if it seems like he's reusing his entire repertoire in a particular film, I've been able to get at least some enjoyment out of it. So while I cannot wholeheartedly recommend the score to Bicentennial Man, if you're a Horner devotee, or really enjoyed the music when you saw the film, I'm sure you'll enjoy it. But you might be better off buying Braveheart instead.