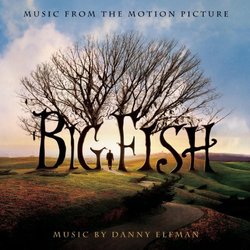 Danny Elfman's and Tim Burton's names have been linked for so long, and their collective output so distinctive and influential, that the adjectives "Elfmanesque" and "Burtonesque" have become quite common.  We often speak of a composer copying Elfman's gothic, quirky sensibilities or a director drenching their canvas with Burton's visual style.  In fact, in many ways it is impossible to think of one without the other.

Well, for all those who want to sample from the pair's artistic collaborations, consider their latest work, Big Fish, an open buffet.  Themes, visual motifs, and symbols from throughout Burton’s oeuvre appear in this story of a young man wrestling with his feelings for his father and the man's legacy through the myths and tall tales he told.  Likewise, Danny Elfman's score is a delightful smorgasbord of musical treats that perfectly suits the story’s outlandish elements as well as its heart.

Many of the score's cues sound as though they were lifted wholesale from earlier Elfman projects.  "Pictures" has the same ethereal, unresolved progression of his score for Good Will Hunting; "Shoe Stealing" contains the driving folk elements from Sommersby; the following cue, "Underwater" evokes Edward Scissorhands with its children’s choir, tinkling bells, and lush strings.  The longest cue, "Finale," is a mishmash of these sounds and others; it even contains a rollicking hoedown and a ponderous waltz over a bed of Elfman's now-familiar electronics.  Weaving through all these cues are two strong solo instruments, the fiddle and the guitar.  Their prominence, and the use of fiddle-inspired dances, is probably because of the story's Southern setting.  All told, the score is a sensory assault akin to the visual one presented in the film.

How, then, do these disparate musical sounds coalesce?  If, as I have intimated, the music works with rather than against the story, what holds them together so beautifully?  The movie's tone and theme accomplish this small miracle.  Burton and Elfman have long been drawn to, as the composer wrote in his liner notes for Music for a Darkened Theatre Vol. II, the mix of "sentimental and peculiar."  The key word for Big Fish is innocence, the trusting innocence of a small child who hears tall tales as truth and shapes his or her world around them.  Yet a child's  innocence holds room for the grotesque, a trait that children and the great literature written for them shares with many Southern authors.  Think of the frightening aspects of Grimm's Fairy Tales that children accept along with the knowledge that the knight will always rescue his lady, or the characters that people Flannery O'Connor's novels looking for redemption.  The sentimental and the peculiar, the innocent and the grotesque, working in symbiosis to produce something magical.

Elfman's score for Big Fish works on these symbolic levels as well as a variety of musical ones.  Every time you listen to this work, there will be more little corners in which to stick your ears.  The second time you listen you might notice the way Elfman changed the main theme in "Leaving Spectre" into a minor-key piano setting and then layered it with pitch bends and prepared-piano sounds.  The third time you might hear in "Rebuildling" the pulse-shift from a strong duple into a triple, a shift so slight as to be unnoticeable, especially when you are already listening on the level of the second-fiddle counterpoint.  This is a score that rewards careful attention.

Also included with the score are eight songs.  Usually songs on an album are of the "songs inspired by" variety and add nothing to the movie, but in this case, each song was carefully chosen to evoke place and sentiment in the movie.  From Buddy Holly's "Everyday," to The Allman Brothers' "Ramblin' Man," they are a welcome addition to this release.  It even contains one original song by Elfman, "Twice the Love (Siamese Twin's Song)," which has shades from his work for last year's Chicago.

After a rather lackluster year in film scores it is nice the have a strong score with depth to its thought and composition to close out the year.  Do yourself a favor and sample its delights.