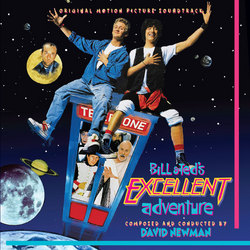 In spite of the great amount of source music and guitar performances, David Newman's score to the 1989 film Bill & Ted's Excellent Adventure gets a considerable amount of screen time. In fact, it dominates much of the funny and fanciful history lesson with serious, orchestral writing that plays it straight.

A soundtrack album released in 1989 was filled with rock and metal songs, but David Newman's score was completely absent. Now the composer's witty, playful and heartfelt companion to the excellent adventures of Bill and Ted makes a triumphant appearance on compact disc, displaying his penchant for sweetness and melody in the comedy genre, along with the action and excitement of a full-blown sci-fi epic. All of the music Newman recorded at his sessions is featured in crisp stereo sound and presented from the original ˝″ three-channel session masters and a two-track stereo session DAT that contained some of the electronic keyboard cues.