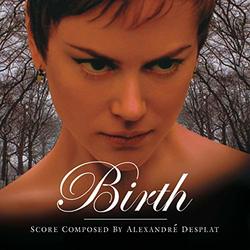 When I reviewed Girl With a Pearl Earring last year, I encouraged you to seek out Desplat's work, as you would not only enjoy it, but could then feel smug as all your friends caught up with your taste as Desplat became better and better known. So, did you follow my advice? Unfortunately, it may be too late now as Desplat seems to have firmly arrived and be making a distinctive mark on Hollywood.

I heard many mixed reviews of last fall's Nicole Kidman vehicle Birth, directed by Jonathan Glazer. But almost to a person, I also heard nothing but praise for the music from those who saw the film in the theater. The music was so powerful, striking, and successful in conveying mood, that everyone noticed it. With the CD release, here is your chance to discover this haunting score for yourself.

Desplat is one of those composers who recognizes that if you are going to score a movie using the techniques of the Western musical tradition, then you should not stop at instrumentation and harmony. One of the overriding concerns of Western composers over the past three hundred years has been harmonic and thematic development. In the 19th century, composers even went so far as to demonstrate how musical development could mirror the character development commonly found in novels. For Birth, Desplat has chosen to use that idea in constructing his score. The score is characterized by a waltz melody first heard in the second cue, "The Engagement." It appears in various incarnations throughout the score and even closes the recording in the "Birth Waltz." This waltz, stately and symbolizing the fragile stability of the main character, is craftily juxtaposed against the score's more sinister elements. For example, the movie concerns a young boy who appears to be Nicole Kidman's dead husband reincarnated. In "Day Out," the delicate tinkering of the celesta reminds us of the child, but beneath it rumbles an almost sub-audible bass line that alternates between the tonic and dominant. Between these two extremes, the themes introduced in the earliest cues reappear and move in and out of each other. It is a haunting effect that leaves you unsettled and aptly displays Desplat's ability to develop character, especially when heard next to the ubiquitous waltz.

To work in this manner a composer must have patience with his or her materials, something Desplat displays right from the start in the stunning "Prologue" when he slowly adds layer upon layer of sound. The "Prologue" opens with a delicate flute ostinato that is soon joined by the triangle steadily articulating the beat. By the time the bells join in this steady layering of materials, you are convinced that this will be a sprightly score. Then the bass enters not only at a different pitch level, but in a different rhythm as well. As each of the other instruments enter, from winds to strings, they each add to our unease by sounding as if they belong in a different prologue. This tension between child-like innocence and dark unsteadiness effectively tells the listener what to expect from this movie (a fact even more underscored when, almost halfway through the prologue, the horns enter with a motive that sounds straight out of Tchaikovsky's Nutcracker). Desplat never pushes his materials, but allows them steadily to grow. Through patience and an assurance in his materials, he manages to show character development through his musical development.

All that said, Birth is definitely not for everyone. It is clearly and classically constructed, extremely effective, and more than a little creepy. Desplat did his job well, and I can only imagine where he will go next, but unless you enjoy that slight feeling of unease, you might wait for his next project. I can almost guarantee that it will be worth your attention.