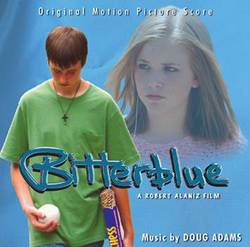 I hate to be the one to bring the following out in this context, but does everyone remember that tired old line about actors who just have to be musicians? That is not to say that people can only be talented in one art; there are multi-talented bastards among us, those indulging and succeeding in Wagner\'s idea of a Gesamtkunstwerk, of being involved in every aspect of a work of art, from the scripting to the acting by way of directing and composing. Doug Adams is an incredibly talented writer, mostly known for his opinionated and articulate articles in Film Score Monthly, praising the musical ingenuity of the more obscure composers while demolishing the simple constructs of the Hollywood sound. Unfortunately, this flair for unearthing and studying truly great film music did not translate to his first film outing, the pro-Christian Bitterblue. Yes, the post-production schedule was tight and the budget was, most likely, on the non-existent side, so one should not expect the production values of a Remote Control release. But even apart from the sound and the mix, the score, while functional, breaks no new ground and is not particularly gripping. All those things for which Adams praised Goldenthal and Danna didn\'t make their way onto Bitterblue\'s canvas. We are left with a tinny-sounding score which is nothing special.

Scores written and executed on a budget of a dime and a half I find very difficult to judge adequately on album. One has to dissociate the purity of the music from the practical sound of the recording. I reflected on that at length when I reviewed Robotech: The Shadow Chronicles, but a tinny, sampled sound is, I like to think, easier to forgive in a smaller-scale drama (such as this one) than in a full-blown space opera. Adams here uses a variety of high-pitched sounds like the harp and a glockenspiel to represent the character of Tobey whose parents died during 9/11 and who has since been living in his own world. The flute also plays a major role, frequently articulating the main melody, such as in "You See Angels?" in a sequence that briefly nods to Silvestri\'s Forrest Gump, whether consciously or not. Tobey\'s nemesis, Jim Doder, is given the almost stereotypical voice of the electric guitar. Throughout the score, Tobey\'s flighty plucked strings come into conflict with Doder\'s tormented electric guitar licks while synthetic strings and other orchestral instruments support, tingle, and embellish. Perhaps the most interesting passages of Bitterblue are when Adams uses percussion, such as in the end of "Basketball and Roses" and throughout "The Fall", the latter being in my opinion the strongest cue on the album, competently mixing snarling brass, pounding timpanis, and aggressive col legnos. If more of the score had been in that league, Bitterblue might have made for a more engaging album.

While it is unfortunate to see such an articulate and passionate artist fall into the same trappings he has denounced in his writings, Bitterblue should by no means spell Judgment Day for Doug Adams. I\'m sure he will find ways to impress me given a bigger canvas and more time. As it stands, Bitterblue is a competent score that sounds like it was completely built out of samples. It offers no novelty nor does it stray from the path of conservative film scoring. Fans of the film will no doubt want to pick it up; aficionados yearning for solid, pro-Christian scores might want to give Gibbs\' Book of Stars or Sayles\' Echoes of Innocence a spin instead.