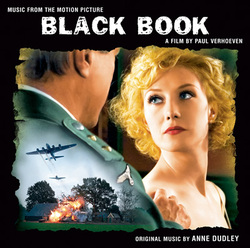 Black Book tells the story of a Jewish woman, Rachel Steinn who joins the Hague resistance during WWII after the Germans murder her family. Composer Anne Dudley is an English musician, composer, arranger and producer. Her scores include The Crying Game, Buster, Pushing Tin and many others. She won an Oscar in 1998 for her score to The Full Monty. Black Book's soundtrack consists of Anne Dudleys beautiful, diverse and emotional score mixed with period jazz and pop.

I do wonder that if director Paul Verhoeven had never made Showgirls back in 1995, would he still have a place in Hollywood and American cinemas of today? It is an unfortunate misfire in a career replete with challenging, invigorating highlights and considering that he followed Showgirls with the wonderful, gleeful wartime violence and satire spectacle of Starship Troopers and the flawed but interesting intellectual exercise on power and cruel self-indulgence that is Hollow Man shows that Verhoeven was not beginning a downward spiral or losing his creative zeal. But alas, it seems that the American public and Hollywood in general were not allowing one misstep in his case, perhaps misunderstanding the goofy fluff that is Showgirls, and decided to remove him from their cinematic menu. Thus he has since returned to his native land of Holland to create films again in his native language, the first of which is the well-regarded Zwartboek, or Black Book.

The film\'s narrative, set in World War II, follows a Jewish girl\'s escape from a German attack in Holland and her attempts to stay alive in the aftermath through a number of allegiances. To help enunciate the inherent dramatic twists and turns, Verhoeven turned to English composer Anne Dudley, responsible for music in a great variety of films and television programs, in the States and abroad. (Tragically, both of Verhoeven\'s long-time collaborative composers, Jerry Goldsmith and Basil Poledouris, have since passed away.) I don\'t recall Dudley ever tackling the subject of wartime espionage and action, but since Verhoeven often allows for wonderful musical expression in his films, then it is a foregone conclusion that the talented Dudley would provide a rich, engaging score. The album presentation opens with a set of lounge/beer hall songs performed by the alluring star of the film, Carice Van Houten, even featuring an introduction by the lounge emcee. All but one, "A Hundred Years From Today", are in German. The bulk of the album\'s 55-minute running time, however, consists of Dudley\'s bold, expressive score.

It begins unassumingly with "Rachel\'s Theme", through tentative, tremolo strings and solo oboe before the troubled, sympathetic melody is heard on high strings. The next track, "The Black Book" opens briefly in a similar manner to "Night Life" from Jerry Goldsmith\'s Basic Instinct but soon shifts from these dangerous tones to bristling action by way of chopping strings and barking brass. More ominous music occurs in "Escape Through The Marshes", full of rising and falling patterns in harp, clarinet and full strings and Rachel\'s theme moving from high strings to horns and then mid-range strings, all building through to "In Pursuit" when action bursts to the forefront again in brass, percussion and low end piano.

Rachel\'s theme is explored further in troubling context in "Rachel\'s Plan" and "In Too Deep", the latter featuring a nice, sweeping statement in the strings. As the album moves through great bellicose brass in "Shot at Dawn" and the tender yet dark-hued "Sleeping with the Enemy", it continues to impress in a refreshingly old school orchestral approach of transparent orchestrations and active, melodic or motivic participation from all sections, unafraid to be clear in its dramatic goals. It is fairly well known that in European film, music as distinct as this is not quite as forbidden as it often is here in the States. There are some more winning moments in the panicked string ostinatos and large-scale brass of "Falling into the Trap" and the low woodwinds and strings of "Confessions of the Night". Rachel\'s theme is woven in among the ongoing suspense by way of flutes and sympathetic strings, finally achieving cathartic, expressive variations in "Rachel\'s Retribution" and a moving coda in "The Endless River".

During all of this, I was reminded not only of Thomas Newman\'s recent, memorable The Good German, but also Patrick Doyle\'s work in the 90\'s on such films as Dead Again and East-West in the musical accompaniment to the films is straight-forward in a traditional manner yet its intent is not parody. Change is inevitable in all art forms, but it is still heartening to have examples of traditional film scoring remaining effective when attached to films of quality and class. The difference of course is that films such as The Good German and Black Book tell stories taking place at a time when film scores were steeped in this particular style and therefore Newman\'s and Dudley\'s music does not seem as egregious to today\'s audiences, while Dead Again is set present day but aims to emulate a Hitchcock-ian tone of decades earlier and most critics understood this. The real test would be for this scoring style to be applied not just to films set in an earlier period or referring to past pop culture, but to underscore current, topical quality dramas and see how it plays. Would a film like Syrianna still work with a score such as this?