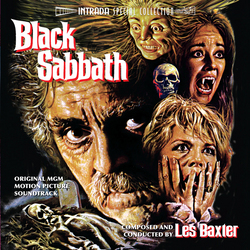 A.I.P.'s top composer came on board to score the American edition of Black Sabbath, giving the greatly altered Italian film his traditionally bold and brassy sound and a more in-your-face approach.

This time, within the confines of traditional horror, Baxter had the unique opportunity to expand things further with music underlining each of the film's three diverse tales and each requiring its own unique musical vernacular. The Drop of Water is buoyed with mysterious ghostly material, The Telephone offers nervous, accented jazz, and The Wurdalak sends viewers back to nineteenth-century Russia with a tale about vampires and rich, period music full of requisite frights.

To present the complete score, Intrada worked with the surviving 1/4˝ 7 1/2 ips full track (mono) elements remaining in the MGM vaults. While these tapes were in reasonably good condition and contained most of the score, sadly nothing survived of the final few minutes for The Wudalak, the longest of the three scores.

However, Intrada was able to work with the music-and-effects tracks for these final minutes, meaning the last portion of our CD does have sound effects but, happily, no dialogue. While an imperfect solution to the situation, it was a more satisfying one than simply discarding the finale.

Black Sabbath was a trilogy of stories—the first was The Telephone, with Michele Mercier as a young woman who begins receiving mysterious and terrifying calls from a dangerous man whom she thought was safely out of her life.

The Drop of Water features Jacqueline Pierreux as a woman who unwisely steals a valuable ring from a dead medium, only to find herself tormented by such seemingly innocent sounds as a dripping faucet, a buzzing fly and, ultimately, the risen corpse of the medium herself.

The final story, The Wurdalak, is a period shocker in which a traveler comes across a family awaiting the return of their patriarch (Boris Karloff), terrified that he may have become a "wurdalak," a vampire who preys upon those he loves most.