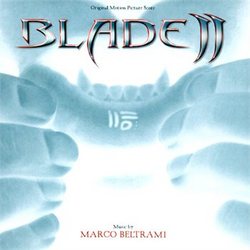 Blade, the vampire film about the half-human, half-vampire "daywalker" (Wesley Snipes) was a bit of a surprise to me when I saw it in theaters - probably because I didn't know what to expect.  With the second film, though, I already knew what the characters were about, and was wondering where it could go from there.  This time, though, director Guillermo Del Toro (Mimic) threw me for a loop.  Not only was Whistler (Kris Kristopherson) back from the dead, but the villains of the film (the Reapers) were so deadly and menacing that the Vampires actually felt compelled to team up with Blade to defeat them.  Teaming up with Del Toro again was composer Marco Beltrami, and the resulting high-octane score is a delightful combination of techno rhythms, orchestra, and synth overlays.

In "Nomack the Knife", Beltrami's distinctive style can be heard clearly and plainly with the percussion, trilling brass, and dark octaves.  It's got a hint of Aliens, a thought that passed through my mind multiple times when seeing the film, but the dark creepy atmosphere in "Waiting for the Sun", replete with guitar and somber string work reminds you that Beltrami has a voice all his own.  But that apparently didn't stop him from teaming up with composer Danny Saber for the brassy and catchy "Main Title" cue - a collaboration that while not explained, yielded satisfying results.

The dark tense action cues ("Suckheads Infiltrate", "House of Paincakes", "Blade's Discharge") are nicely complimented by the softer, melancholy cues ("Nyssa Sucks", "Family Feud", "Nyssa Over Easy") resulting in a highly satisfying listening experience (you just gotta love the track titles that Beltrami came up with).  "Wind and The Willows (Abavo)" is a rather interesting cue - sounding a bit like an avant-garde source cue, and closes the album on a bit of an odd note.  The CD runs a tad over 33-minutes in length, but I never felt as though I needed more - it's like eating a good meal, and not being stuffed when you're done.  You certainly will be getting your money's worth.